Tip o' the hat to Instapundit and AutoblogGreen:

One of Japan's largest sake manufacturers, Gekkeikan, has announced the development of a new "super yeast" able to produce cellulosic ethanol from non-edible parts of plants, such as paddy straw and chaff. The super yeast that produces alcohol was created with genetic engineering, by integrating koji mold genes that produce cellulolytic enzymes into sake yeast. These enzymes become densely displayed on the surfaces of the yeast cells. Since this super yeast has the functions of the standard koji mold, it achieves one-step production of ethanol from pretreated cellulose. The company claims the whole process is completed with a new easier pre-treatment at high temperature and pressure, which saves energy and uses insignificant chemical components.

Debate? Have at it!

Six college presidents in Maryland are among more than 100 college and university presidents nationwide who have signed a statement calling for a public debate on rethinking the drinking age.

Naturally, the subject has gotten a lot of media attention in the past two days, burning up talk radio and online forums.

I say that rational debate and discussion is welcome and long overdue.

Unfortunately, we're guaranteed not to get rational debate.

Discussions on this topic inevitably descend into the emotional: on one hand, the MADD crowd insisting any change would bring carnage and "if it saves just one life it's worth it," while opponents of the 21 age can trot out reams of examples of things an 18-year-old can legally do besides drink a beer--more rational than "won't someone think of the children?", but not by much. And both sides of the discussion can pull out untold numbers of studies supposedly reinforcing their talking points (as long as one doesn't attempt truly critical analysis of the data, natch), with the seemingly inevitable shouting match following shortly.

I had to shake my head at the MADD-type that accused a university representative (U of Md.-College Park?) on WBAL-AM yesterday as being driven by financial incentives--i.e. the university stood to gain financially from on-campus alcohol sales.

Looking at Lew Bryson's excellent blog, especially his posts on this very subject, reveal that this movement is hardly new, just gaining some publicity.

Okay, first off, MY bad. In my Mid-Atlantic Brewing News column, I inadvertently stated that the Max's German Beer Fest was Sept. 19-21. That was the weekend originally scheduled by beer manager Casey Hard and scribbled on my calendar, but somewhere along the line he changed it to Sept. 12-14th, as correctly noted in the MABN calendar.

So change your hotel reservations.

The stated goal is 50 draft beers and 75 or more bottled German beers available. An UPDATED list of drafts and bottles from Casey, about 90% confirmed with more possibly to come:

From ads in today's Baltimore City Paper and posters at the Wharf Rat-Fells Point:

Free buffet included, live music from Smooth Kentucky, games & prizes
Bottles of DuClaw's Colossus (21%) will be available for sale.
(They're also advertising a Jim Wagner Kissing Booth. You decide whether or not to take them seriously.)
Posted by Alexander D. Mitchell IV at 8/13/2008 No comments:

Japanese Beers--Just in Time for Otakon! 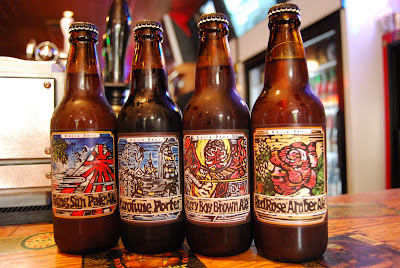 Casey Hard, Max's cellar-master, informs me that the company's brewer is either English or American. With a name like Bryan Baird, I would hope so.

The extra-special bonus is that Otakon, the Japanese anime convention, is in town this weekend (same time as the Virgin Music Festival, sadly for some), bringing perhaps 15,000-20,000 hard-core anime and Japanese culture fans to town for three days. It's possible one of them might even make it to Fells Point for a beer...... maybe....... I must admit that sometimes they have to remind a scant few of those fans to eat, sleep, and/or bathe..........

Red Rose Amber Ale 5.4%: deep amber, bright with a touch of sediment in the bottle, lovely head retention.... nose very mellow hops, but initial sip is almost an India Pale Ale in hoppiness. This is an ale beer (which uses yeast that ferments at higher temperatures) that was fermented at lager temperatures (i.e. 10 degrees F colder than ale), according to the label........... wait a minute........ Steam/California Common is lager yeast at ALE temps! (We just looked it up to be sure!) So what do we really have here? a nice, VERY malty amber, with the vaguest hint of either oak barrel aging tartness or a touch of Belgian tartness and cloudiness. A terrific woody/piney hop balance and finish. Dry, almost chalky finish, very thirst-inducing........ beware. Great flavors, but not easily categorized.

Angry Boy Brown Ale 6.2%: classic English brown, with a bit richer head. malty nose, slightly sweet, with a hint of hops. QUITE a character-filled (translation: yeast and hop flavors) brown, this comes off the way I would expect Hitachino to do a brown: a touch chalky, nicely hopped, rich mineral and yeast flavors, the latter alluding to Belgian yeast without being funky. Dang, this is good.

Kurofune Porter 6.0%: a touch light for porter color, moderate head retention, nose smacks of yeast initially...... a rich, complex porter, initially reminding me of Alan Eames' Flag Porter from ages ago..... a good rich medium/light roast flavor balanced with a fruity ale yeast, hints of iodine/seaweed and smoke in the finish. A nice one; I want more of this.

Now, just to keep the theme of the night going, because the style I order next is so popular in Japan......... Ridgeway Bad King John English black ale 6.0%: yes, black beer is different from stout even if it doesn't look it. Most black beer in Japan is lager, but this is an ale. So? Bright (clear) but still porter brown, a lighter body than most porters, excellent roast flavors, mellow finish. 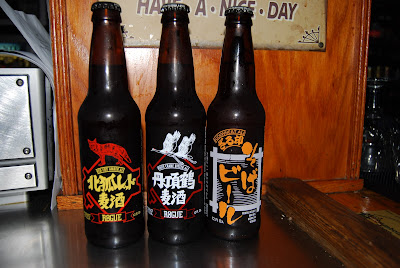 And just to add to the fun, there are three MORE "Japanese" beers worthy of your attention: Three beers made by Rogue Brewery of Newport, Oregon in partnership with a Japanese brewery--Red Fox Amber, White Crane Bitter, and Buckwheat Ale. The label artwork is silk-screened onto the bottles and are largely in Japanese, as these bottles were actually intended for the Japanese market. These 12-ounce bottles are no longer made, and these are some of THE last bottles available for retail sale anywhere. If you like the thought of a Japanese beer collectible (better than a "Beer-Chan" t-shirt by far!), here's your chance! (Fewer than a dozen bottles total as of Wednesday night!)
Posted by Alexander D. Mitchell IV at 8/05/2008 No comments:

Is this "dry-hopped" to you? 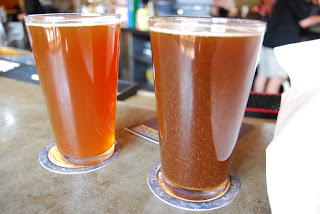 I'm hiding the identity of the subject of this discussion for now--I delayed publishing it in part to protect the possibly innocent, and perhaps in hopes of a more neutral assessment.

I was poured two cask-conditioned beer recently at a venue. One was advertised as dry-hopped.

The one on the right in the picture.

Yep. Those are fragments of pelletized hops in the glass.

Now, I hear a lot about sediment in beer now and then--people swearing by and at it. But what are we supposed to think about three-dimensional hop character of this nature? Have any of you ever seen it before? My personal guess is that a hop bag in the cask didn't do its job, or tore open, and/or the cask wasn't properly prepared or settled before the pouring.

Beer and BBQ in Federal Hill

I was tipped off to a relatively new BBQ joint in South Baltimore, so far south on Light Street that it's practically underneath I-95. Importantly to us, Rub BBQ has three house beers sharing a mostly-Coors-based draft line-up: a bock-ish Red, an IPA, and a seasonal (a wheat as I type). In addition, the place features its own root beer and cream soda on draft, and also stocks a couple decent bourbons, as well as a loooong list of frozen drinks and cocktails.

The source of the house beers? Surprise: no other than the Dog Pub Brewery of Westminster, which seems to be finding a curious niche contracting house ales for more than just this place.

But how's the BBQ? I'm well-versed in Carolina and Virginia BBQ traditions, and am somewhat well-versed in Memphis and Texas versions as well. This place aims for the Texas style; my sandwiches were straight-up meats (chicken, turkey, beef brisket, or sausage) to which the patron can add mild, hot, or honey mustard sauces. I have a client who usually takes me to Red Hot & Blue for lunch if I'm working with him (it's an excuse for me to enjoy hearty meats when I'm married to a vegetarian that would starve at such places); Rub would easily satisfy a RH&B fan as long as he doesn't need to see music ephemera on the walls. It's a project of Michael Marx, the former owner of the Blue Agave Restaurant elsewhere in the area.

NOTE/EDIT: URL problems have temporarily (we hope) disrupted by what appears to be a trademark/URL/website problem between Rub Baltimore and a similarly named place in New York City. Stay tuned, or use your favorite Internet search engines.
Posted by Alexander D. Mitchell IV at 8/01/2008 No comments:

From the Associated Press via Google:

MillerCoors LLC is ending testing of its trio of craft styles of top-seller Miller Lite so it can rethink the brand, the company told distributors this week.

The company had high hopes for the brand, which tweaks Miller Lite into various styles of craft beers such as wheat, amber and blonde ale.

In April, it said testing was so strong it would release the collection of beers nationwide by September. But by mid-June it said the release would be delayed for more testing.

The collection aimed to latch onto the fast-paced growth of craft beers, which are rising faster than overall beer sales and also command higher prices.

More at the link.

Gee, who could have seen this coming?