Hell is having two terrific casks being tapped across town from one another.

Heaven is either of these beers on cask.

So start with the northeastern side of town: White Marsh/Red Brick Station.

Octopus' Pajamas 6.8%-- a real rauchbier, even if that's not what they intended. I've never seen a Scottish with this much smoke except here. Very dry and smoky, drinkable and not overly potent. Perhaps the German models are a bit fuller in body, but I'm not complaining. Just don't go into this expecting a super-sweet malty beer like a lot of so-called "Scottish" in the States.

DPM Lager on firkin for SPBW 5%--a nice dunkels, esp. for a Ringwood house. Dark and roasty with a creamy edge to the flavor, almost a hybrid between Guinness and extra-dark lager. (It's a freakin' firkin, don't ask about nitro taps!)

Batch 1000 barleywine, aged 3 months in oak and shoved aside for handpump: There's NO WAY to get past the Scottish orange marmalade character and flavour. LOTS of Seville orange peel flavour--amazing when you consider there's no actual orange peel in it, that it's all oak. I can't get past a light orange liqueur with lots of wood.

UPDATE: And for the one or so of you who might have been wondering what the OTHER beer was: Heather Ale's Kelpie Seaweed Ale, on handpump at Metropolitan in Federal Hill. A WONDERFUL rich dark ale, malty as a red but dark like a porter, with a rich, full flavor. Is it any wonder? Carrageenan, one of those mystery ingredients you see in such things as soups and ice cream, comes from another kind of seaweed and is used as a flavor enhancer, generally by adding mouthfeel and texture.
Posted by Alexander D. Mitchell IV at 3/20/2008 2 comments: 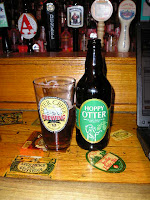 So I'm an otter fan. Not the beers, the animals. It comes from a succession of girlfriends comparing my characteristics to an otter--hyper, frisky, fun-loving, frolicking, swimming, etc.

So what hope do I have against a bottle from the Otter Brewery of Devon, England? Especially Hoppy Otter? A 6.8% IPA, 500ml bottle. Bright amber, med. head retention, a nose somewhere between grassy, piney, and malty. This will disappoint many an IPA fan, but I like it--it turns out to be a blend of barley, wheat, oats, rye, and spelt (!) and five of the Pacific Northwest's "most citrus-flavoured, aromatic whole cone hops". It's a malty beer with lots of piney balance, not so much grapefruit in this.

And what did I preface this with? A nice Otter Creek Kolsch Spring Ale (hey, that's what the tap handle says), tonight's "Pinch the Glass" special: nice light ale, very much reminding us that spring and lighter beers are around the corner. Am I perverse for wanting lamb with this?
Posted by Alexander D. Mitchell IV at 3/19/2008 No comments:

Max's is pouring a Birrificio di Como Malthus Baluba "Italian Double Malt Stout" tonight. (The promised Birrificio Italiano Amber Shock is pulled, "diacetyl" says Casey.) The first thing that comes to mind is those Belgian beers labeled "stouts" at the Belgian fest--no way. This has a color more attuned to a thick barleywine, deep amber with light getting through, fairly bright, nice head retention. At 6.9%, I'm more likely to peg this as a Scottish wee heavy, more like what the Americans do to replicate a big, malty MacEwans or MacAndrews (now there's a name from my long-ago drinking past). Malty and creamy, sweet as a dessert wine, a touch of oatmeal character and caramel in the body, some raisins in the finish. A bit of tartness in the back of the palate, unsure if flawed or intentional.

A terrifically interesting beer, but a total "train wreck" of complexity and mislabeling. Someone in the beer social group supposedly quotes Jim Wagner as saying that beers can carry at most one fruit and one spice. I open the floor for discussion.

So what does a typical American "mutt" (of mixed Scots, Scots-Irish, Welsh, and German heritage) drink on St. Patrick's Day?

Right now, a blend of black tea from Belfast and a Swedish green tea with wit spices and orange peel.

In other words, black tea with green, white, and orange.

I can live it it. Better than dealing with Amateur Drunken Irish Impersonator Night.
Posted by Alexander D. Mitchell IV at 3/17/2008 No comments:

Weekly Max's Beer Social: Casey is a Southern Tier fanatic, so any time new beers show up from there, you can expect them at a Beer Social.

Southern Tier Jah Va! 12% imperial coffee stout: almost ink-black, not quite totally opaque, thin head and retention. Hints of coffee in nose, no hinting in the flavor--VERY coffee-laden, although not dominating the flavor, much more coffee in the front fading to a rich properly roasted stout at the end of each sip.
Posted by Alexander D. Mitchell IV at 3/11/2008 No comments:

Hey, I bought it in Baltimore. Well, suburban Baltimore. So it counts. And the redundancy is Moylan's, not mine. This Novato, California brewery's products were long available in the East only at the Brickskeller, where years ago I was captivated by the super-concentrated, sweet Scottish ales and barleywines. Now I'm trying a "bomber" (22-oz. bottle) of a style I should know better about, not being a hop-head.

Label says 8.5%. Golden, bright, rich head, supremely leafy hop nose. Okay, who ordered the hop extract? There is little here but hops, hops, and more hops. Bitter, bitter, bitter all across the tongue. There's a decent malt backbone giving this basic structure, but it's still a vessel for hop tea. This almost hurts the glands in the back of the throat to drink. I find myself pouring the second half into a flip-top for future enjoyment/punishment, and wanting to scrub the hop fuzz off my tongue--or maybe harvest it for future brews?
Posted by Alexander D. Mitchell IV at 3/10/2008 No comments:

1) I expect today and tomorrow to be THE big demolition days at the former DeGroen's--the streets adjacent to the buildings have been declared "no parking" zones for both dates, according to signs I saw last night. (By the way, I talked to one brewery owner who told me "We looked into buying some of the remaining kegs, but the keg handles were made from that black rubber that covered them, and those handles had a tendency to break....")
2) The Philadelphia Inquirer today has a massive section on beer--basically their entire food section is devoted to beer in honor of Philadelphia Beer Week. If you can't grab an actual newspaper, see it online here . I might also peruse the Philly Daily News online as well (home of Don Russell or "Joe Sixpack"), since they don't ship that paper down here:
3) What, you didn't hear about Philly Beer Week? Well, now you have.
4) The Philadelphia City Paper had a cover story last week addressing the hypothetical question "Is Philly America's greatest beer city?
Guess what. They didn't even consider DC or Baltimore. The serious competition was Portland and San Francisco.
And if you read the story for yourself, you just might find yourself agreeing:
Go Here for more related articles.
The basic argument: Philly has and is surrounded by a host of good brewpubs and microbreweries. On top of that, it's hard to walk into any bar in Philly and NOT find a micro tap--Victory, Flying Fish, Yards, etc. I sure can't say the same for Baltimore. Philly also has FOUR Belgian-styled/pouring bars/restaurants; DC can match that if you include the far-off suburbs of Olney, Occoquan, and Baltimore.
5) So why don't we have a Baltimore Beer Week? Stay tuned................. We actually may be working on that. Does anyone have suggestions for the best week-or-more in which to hold it?
Posted by Alexander D. Mitchell IV at 3/06/2008 No comments:

Nirvana in a glass

Granted, this beer isn't going to be everyone's fancy--I can think of a few people who would turn up their noses at it--but I'm sitting here enjoying a glass of Red Brick Station's Batch 1000, an outrageously BIG barleywine. Murky brown, the color of Thomas Hardy's or a good nut brown, a bit of haze, very lightly carbonated, served through a regular CO2 tap.... aged in a new oak cask for a solid year...... This smacks of a dark ESB crossed with a bitter orange liqueur. Back when it was made, I positively screamed that it reminded me of Keller's Scottish orange marmelade, and it still does--sharp bitter Seville orange peel dominates here, laced with rye whiskey notes in the background. A very full-bodied British-style barleywine, with pronounced oak notes untypical of the usual heavy-hitting bourbon stouts or oaked big beers, and a refreshing change from same. Granted, this is a beer all should try a sample of first before ordering a full serving, but for someone who loves aggressively bitter beers like the over-the-top imperial IPAs, this should be a must-have. (Ringwood bashers, please resume your sometimes-warranted critiques of the yeast style on your own blogs, please........)
Posted by Alexander D. Mitchell IV at 3/05/2008 No comments:

I'd throw you a photo or pinch a logo or label from the Fordham website, but the Fordham Brewing website disavows knowledge of this or their earlier Scotch Ale, so........

Draft pour, very muddy light-to-medium brown, good head retention, classic banana-clove nose, Max's Taphouse beer menu says 7.5%.......... the classic banana-clove-caramel-milkshake flavor, but just a little thin on body and mouthfeel, seemingly because it's a bit too sweet for my liking (if this were a homebrew, I'd say a touch underattenuated or green. Certainly not a bad effort at all; I think a wee bit of bottle/keg conditioning would help it along.
.
Posted by Alexander D. Mitchell IV at 3/04/2008 2 comments: