The man who owns Hammerhead’s bar is not only bringing a brewery to the [Ocean City] Boardwalk, he’s also inviting the public to help design his company logo.
Danny Robinson said construction starts soon on his brewery, Shorebilly Brewing Co., at 10th Street on the boardwalk, at the site of what’s now an ice cream shop. It will be the only brewpub in Ocean City proper.
“This area is already known for great beer,” he said. “If we can say, ‘Hey, this is brewed only a few blocks from here,’ bars will be anxious to get this on their taps. It will be available in as many places as I can get it.”
So far, he’s having a pilot brewing system built in St. Michaels. When it arrives, he and his brewmaster will experiment with different flavors. They will brew year-round; whether the bar is open year-round remains to be seen.

Robinson said he hopes to brew and sell his beer in cone-top aluminum cans. They’ll look like the Tin Man’s head, and come with a bottle cap instead of a pull tab. Robinson said they haven’t been in use since the 1940s. 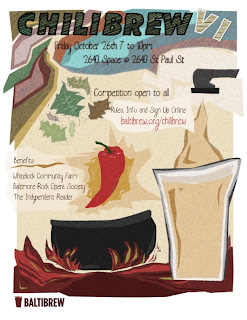 Get your brew pots, airlocks, and chili pots (hopefully in that order) bubblin’!  Your friends at Baltibrew are bringing you Chilibrew VI, to benefit Whitelock Community Farm, Baltimore Rock Opera Society, and The Indypendent Reader!
As always, the competition is open to all, to submit either a chili, a homebrew, or both!  Judging is entirely "hedonistic" (unsanctioned by the BJCP).  Said simply, if your beer and chili taste good, you can win!
Please note: the name "ChiliBrew" does NOT mean you need to put chili peppers in your beer!  In fact, ALL styles of brew are welcome, so if even if you just have a bunch of assorted bottles on hand that've been aging for months, bring it on!  The chili competitions will have separate winners for vegetarian and chili con carne (meatitarian).  A minimum quantity of at least 64oz of chili or brew is required to enter, but larger quantities are strongly encouraged (after all, people can't taste something that has already run out; see the rules for more info).
Please visit the website below for official rules, online entry forms for competitors, and other information regarding the event.
While there is no entry fee for competitors, there is a suggested donation of $15 for attendees to benefit the organizations above and cover costs.  That'll get you a commemorative tasting glass and all the chili and homebrew samples you can fit in your gullet (while supplies last).
Please make every effort to your online entry form submitted by Friday, October 12.  If you do not have it in by then, we cannot guarantee that you will have space at the event.  Space is limited, so get on it!  Sponsors include Union Craft Brewing and Maryland Homebrew.

What:  Chilibrew VI
When: Friday, October 26th, 6:00pm for competitors, 7:00pm for general public
Who:  All interested homebrewers and chili jocks
Where:  2640 Space – 2640 St. Paul St. Baltimore, MD
Why:  To support community-minded, do-it-yourself, sustainable lifestyle (with a full belly and a lightened head!)
How:  Brew your beer, brew your chili, fill out our form and show up with some friends to help dish and set up!


Personal suggestion:  The winners tend to be the folks that bring enough for everybody to sample, and thus vote for!
Posted by Alexander D. Mitchell IV at 9/28/2012 No comments:

DuClaw Brewing seems to have found a new home.

With the caveat that anything can still happen to disrupt the deal (and it's happened before)......  We're picturing Bullwinkle the Magician saying "This time for sure!..."

After the earlier announced plan for the purchase of a Havre de Grace, Harford County industrial location for a new brewery location fell through, DuClaw Brewing Co. president David Benfield confirmed over the weekend that the company was partway through closing on a new deal to acquire a large industrial building on Yellow Brick Road in Rosedale, Baltimore County, a short distance from the junction of Pulaski Highway and the Baltimore Beltway.

"It's literally the same building that Legends Limited, the beer importer and distributor, is based out of," said Benfield.  "We could just roll our production through a roll-up door to them.  But unfortunately they're just not our distributor!"

The planned purchase of the 165,000-square-foot Havre de Grace location was undone by demands of the property developer, according to Benfield.  A larger brewing system is en route from overseas and is expected to arrive in November.  The company expects to make a gradual transition to the new facility from its current Abingdon plant, and hopes to be running at the Rosedale site in spring 2013.  Benfield raised the possibility that the new facility could end up, like Heavy Seas Brewery in Halethorpe, playing host to its own special events such as the annual Real Ale Festival in September.

In an event that helps to kick off Baltimore Beer Week, Liam Flynn's Ale House, BaltiBrew, and the Free State Homebrew Guild is sponsoring a brewing contest (also open to professional brewers) for beers brewed without hops at all.  Entries must use at least 50% malted grains, with anything besides hops--herbs, spices, flowers, botanicals, etc.--used to balance sweetness.  Entries must be at least 64 ounces of beer, and be submitted to the Ale House by midnight October 15th.  Judging will start at 5 PM on October 20th; one of the judges will be Bruce Williams of Scotland's Williams Bros. Brewing Co., the creator of the well-renown Fraoch Heather Ale.

Further details to come, when the principals post them online......
Posted by Alexander D. Mitchell IV at 9/09/2012 No comments: 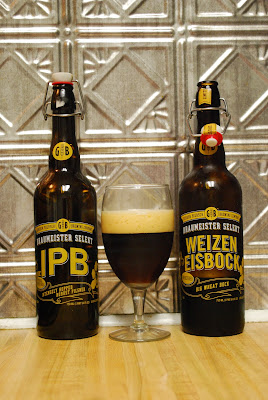 Because Gordon Biersch is preparing to open a new outlet of its brewpub chain in Baltimore (target opening date: October 22, right during Baltimore Beer Week), the Beer In Baltimore offices have started receiving advance samples of Gordon Biersch's new Braumeister Selekt series of "beer geek" limited releases, being sold in 750ml flip-top bottles in limited markets (including Maryland, but oddly the supply has ended up concentrated in the Frederick, Hagerstown, and Prince George's County areas so far!).

The first of these to arrive is IPB, or "Imperial Pilsner Brau."  It's a quite intensely hopped beer, clocking in at 6.5% but tasting stronger, with an official reading of 50 International Bittering Units (but some reviews have suggested the number may be closer to 70), from a blend of Tettnang, Saaz, Spalt, and Hallertau hops.  The malt backbone is there, but it's still far hoppier than most beer aficionados would expect for the style, mimicking more what someone's impressions of a Northwest U.S. hophead would produce if asked to produce an "imperial pilsner."  The end effect is balanced, but aggressive rather than smooth.

Arriving earlier today is Weizen Eisbock, a brutally intense 10% ABV malt monster of a "big wheat bock" on the lees (unfiltered).  A deep amber in color, it has a thick caramel malt nose and incredible head retention.  The flavor, typical of unfiltered wheat bocks, has a tannic and almost tart astringency balancing an almost syrupy bock palate, with a distinct chalky note common in wheat beers and a hint of rich wood smoke in the finish.  The malts came from the Weyerman Märzerei in Bamberg, Germany, with hops "sourced from the Hallertau and Tettnang regions of Bavaria."

The label for this beer indicates that G-B's brewery produced this beer by "freezing the water molecules out of the brew and removing the frozen portion, thus concentrating the alcohol and flavor of the resulting ale."  (This technique has earned official rebuke, and even fines, from some alcohol regulation agencies for past efforts by some brewpubs, as it can fall under the technical definition of "distillation," often prohibited by brewing licensing or regulation.) The label also indicates 30 IBUs; if I were redoing this beer I would be tempted to add a bit more hop character as balance to the overwhelming sweetness.

The press releases sent with this beer quotes brewery co-founder Dan Gordon as saying "To the best of my knowledge, we are the first brewery in the world to brew a Weizeneisbock."  The company brewed 3,500 cases at their San Jose, Ca. brewery, expected to retail for about $9 a 750-ml bottle.

Our main critique of this beer is that, like too many pumpkin and holiday/Christmas beers, it's out too early.  (This IS a promotional sample, mind you.)  This is a beer that, like many barleywines and old ales, seemingly demands heavy snow falling outside, a hearty pot roast or brisket in the oven, and a fire crackling in the fireplace (assuming, of course, that the flue is still open).

The brewer for the new Harbor East location, Chris Cashell, is credited with having a hand in the creation of the original batch of The Brewers Art's flagship Resurrection.  It will be interesting to see just how much latitude in creativity he'll be given at his new job--and what may come from his mind and hands in a new environment.
Posted by Alexander D. Mitchell IV at 9/07/2012 2 comments:

As covered by USA Today:

Here’s proof that the world now moves at the speed of the Internet: Just days after the White House released the recipes for its home-brewed Honey Ale and Honey Porter, Internet home brew supply shop Northern Brewer has shown good hustle by launching two kits containing all the ingredients needed to recreate the White House home brews.
“We had customers and fans asking us almost immediately upon release of the recipes when we would have beer kits created for them,” said Chip Walton, a member of Northern Brewer’s marketing team. “Politics aside, I think people are interested in brewing the same beer the president is drinking at home and offering as gifts on his travels.” The kits have been selling steadily since they were released on Tuesday.

The Annapolis-based What's Up? Magazine is bringing back its Chesapeake Beer Madness bracketed beer competition (all local beers) for September and October 2012.  The first round of voting starts tomorrow.  Samplings of competing beers (free, but reservations through the website required) will be available at Staples Corner Liquors on Rt. 450 in Gambrills on Saturday evenings in September.
Posted by Alexander D. Mitchell IV at 9/07/2012 No comments:

Just a quick rundown of what Heavy Seas Alehouse and the Heavy Seas Brewery is offering soon:

More at the Heavy Seas website.
Posted by Alexander D. Mitchell IV at 9/07/2012 No comments:

Hampden on Rye at Hampdenfest, and other weekend events

Debutting at Hampdenfest tomorrow on 36th Street in Hampden will be a collaborative effort from three local breweries: Hampden on Rye, from Union Craft Brewing, The Brewers' Art, and Dog Brewing.

You already all know about the DuClaw Real Ale Festival, and if you don't already have your tickets, well......

In addition, let us also point out Waynestock, the annual block party outside Mahaffey's in Canton.  From noon to 11 PM (and later), typically a good time for those who like a block party, provided the weather cooperates....
Posted by Alexander D. Mitchell IV at 9/07/2012 No comments:

Word has belatedly reached Baltimore that one of the original brewers of the Baltimore-area microbrew renaissance of the 1980s, William Robert "Reverend Bobby" Kittrell, whose resume included stints at Oxford Brewing, The Wharf Rat, and Sisson's, Stone Brewing in California, and then several Chicago-area breweries including Goose Island and Moonshine, passed away in Chicago this past April at age 51, reportedly of cancer.