Ladies and gentlemen (well, whoever is reading this), I have tasted the Brewer's Art Resurrection from a can.
Well, at least that's what the cans said. 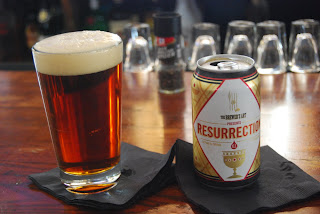 No Idea Tavern in South Baltimore was the first to alert me (and others) to the arrival of their order of cans of the "new" elixir, brewed and canned under the supervision of BA brewer Steve Frazier at Sly Fox in Phoenixville, Pa.  They started with a special on the beer last night, but I was unable to get there yesterday, so when they opened today at 5, I was there.
So, how is it?  The title of this post says it.
It seems like a plainer, stripped-down version of Resurrection, as if someone had fermented it with a lager yeast instead of a Belgian yeast.  The flavors of the malt and hops are there, but not that third dimension, that Belgian-styled funk. 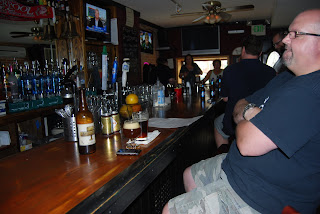 To confirm our suspicions, fellow bar patron Mark King and I shared a 750ml bottle of the bottled Resurrection, brewed at the same brewery.  It confirmed what we already knew: the bottle conditioning of the bottled beer produced a richer, fuller, and more developed and complex  (Mark said "sweeter") beer than what was in the cans.
The folks who will be falling over themselves to drink this are likely the ones who know enough to pass similar judgment.  I've seen similar effects with other beers that I have sampled in multiple forms--Guinness, Smithwick's, Boddington's (all nitro), Oskar Blues and Victory products.  The cans somehow lack that certain something.  But this was by far the biggest change I had seen, as if some major multinational brewing conglomerate had taken over.  (I continue to allege that New Belgium's beers have been "dumbed down" from their original presentation in 22-ounce bombers to 12-ouncers; I have to give the benefit of the doubt to a ten-year gap in samples.)
Go on, folks.  Try it for yourself.  But if you're a Brewer's Art regular, don't get your hopes up.
(Thanks again, Mark, for sharing with me--and by extension, us.)
Posted by Alexander D. Mitchell IV at 5/27/2010

Yikes. Not good news for those looking to take some Rezzy cans and plastic cups to the pool, golf course, etc. this summer! Though honestly, it's still gotta be better than most of the cans out there (and cheaper than the very good aluminum offerings from companies like 21st Amendment, Brooklyn, Avery, Oskar Blues, etc.)

Either way, thanks for the honest opinions.

Mark, Jason and I speculated on what they would charge for these cans at the ballpark and football stadium. My speculation: $9 a can. My reasoning: Isn't the going rate for a serving just a hair under what a sixpack costs retail?

Bummer. This gives rise to an interesting new theory: does a beer that needs to be bottle conditioned fail in cans? The ones I like best from Oskar are the hoppier varieties that are best consumed young.

Sandy, I obviously have a biased opinion, but we did side-by-sides at the pub and really liked it. I would encourage the rest of you to try it and make up your own mind rather than taking Sandy's dismissive post as your guide.

Obviously, that's going to be the makers' opinions, and obviously BA exercised quality control, and I assume all the guys wanted the cans to taste as much like the draft as possible.

The ONLY possibility we came up with at No Idea was that the cans were simply too fresh--that the beer needed a couple days to develop further, if indeed it can within an aluminum can.

I was actually surprised that you thought it odd that the bottle conditioned beer and the canned beer were different at all! Have you ever side-by-sided two products in these very different methods of storage and dispensing before? Not being contentious, but AFAIK none of the beers you mentioned are available in both...unless Victory started canning their products recently...

One more thing - I was highly skeptical of how the beer was going to be in a can, so your comment about "maker's opinion" is off the mark. And to clarify: the side-by-side we did at TBA was with draft, not bottles...

If you would like to do a real double-blind taste test, I'm a scientist and I'm here to help...

I suggest canned, tap, and bottled, with at least 3 or 4 tasters. It will answer the question "can anyone really tell one from the other," as well as "which is preferred" without any bias from either the taster or the tester.

I can assure you that your brain plays crazy tricks on you if you know which is which, and it's impossible to really know until you have tested them in a scientifically controlled manner.

I need to drive to B'Art to pick up the keg of Ephemerella I won anyway- so say the word. Let's put to rest whether they are different at all.

Mike, I tried to get enough volunteers to do this at Max's on Tuesday night. Everyone's tongues were a wreck from utterly excellent Quebecois beers.

But I'm certainly game for this test at some neutral location that normally has Resurrection on draft. I would prefer Max's simply because I can trust everyone behind the bar to do the pours right, and there's enough distance involved that we can't see them being poured if we simply hide upstairs or go off in the corner. But any good beer place with clean glasses and a Rezzie tap is fine with me.

Oh, and one more thing: We probably don't need bottled Resurrection in the mix. Judging from the side-by-side at No Idea, we could probably spot that one at two or three yards. Darker, slight haze.

If the taste test is set up right, you won't be able to see the color, or look for differences in foam, or tell the difference from the temperature. Those things need to be controlled or the whole test is useless. This is why you do a real double-blind test- you must remove the bias of both the taster and the tester. It's not as easy as it seems on the surface.

"AFAIK none of the beers you mentioned are available in both"

AS...... IT.... TURNS..... OUT..... I have been extremely lucky enough to have had draft, bottled, AND canned Guinness, Boddington's, AND Smithwick's to sample side by side in the past, all freshly brought back from their native lands. If you look in the right place in Max's Taphouse, you'll see one of my Smithwick's nitro cans up on the overhead shelf, next to the (empty) bottle of Old Crustacean Barleywine that was bottled for the 2005 AHA Convention here in Baltimore.

Victory: Okay, I'll concede that I momentarily mixed up Sly Fox and Victory. But I've managed a side-by-side of those fellas as well.

I'll go along with everything but the color/appearance. If there's a color or other appearance difference between the two, that has to be noted as part of the equation and differences. It won't matter--we still won't know which is the draft and which is the can, right? We have to expect the bottle-conditioned sample to be just a bit cloudier--that's the nature of the beast.