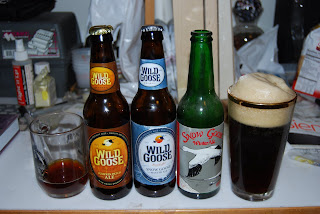 It took considerable effort, but I finally located a sixer of Wild Goose Pumpkin Patch Ale at Shawan Liquors, and a day or two later the first of the 2008 Wild Goose Snow Goose.

Pumpkin Patch: I had a fellow beer writer insist that he just didn't care for pumpkin beers, any of them. I encouraged him to seek out this option and report back to me. I'm still awaiting comment from him, but as for us:

Lovely bright amber, decent head retention, malty and vaguely bakery-reminiscent nose (pie crust?) with delicate spice notes. This is really a spiced ale with those distinctive cinnamon, ginger, clove, allspice, and nutmeg notes (yes, that's the classic pumpkin pie spice combination). The label says it has pumpkin in it, but truth be told, if you don't tell someone they well may not figure it out. And that's what I like about this-it's still beer, not pumpkin with some beer thrown in like some of the pumpkin beers out there. (Although my wife found herself partial to Cape Ann Pumpkin Stout.....) 6.0% abv, 28 international bittering units. This could make a lovely winter warmer. And speaking of that...........

Snow Goose has long been a personal favorite of mine, dating back to its first batch in 1993. It was originally a richer, maltier version of Wild Goose; with some of the primitive equipment and lack of filters at the original Cambridge brewery, it inadvertently became a bottle-conditioned beer. Even when it first came out, I recognized the high malt content and bottle conditioning as a potential beer for aging, and laid down several bottles beside the Thomas Hardy's Ale bottles in hopes of coming up with something good.

Does it keep? I took my last 1993 bottle to the "reopening of Wild Goose" party (basically the fourth rebranding of the old Blue Ridge brewery) in Frederick two years ago, when old Goose partner Jim Lutz was brought back in by Flying Dog as VP-Sales for their newly-purchased eastern brewery (soon to become their only brewery). Jim proceeded to drag the brewers back into the brewery's lab along with me and my bottle, and opened it up to pass it around, proclaiming "That's what we need to be doing, that's what we need to aim for!" Yes, it was old, quite a bit stale and oxidized (well, come on, they used green Beck's bottles back then!), but the flavors were all there, nicely mutated into almost a lightweight Thomas Hardy's.

And 2008's version? 6.3%, 30 IBUs, says the label. (Both labels have been recast to fit a new label image for Wild Goose that's been shipping for several months; thankfully, both seasonals feature at least a token appearance of a version of the original flying goose graphic, and the Snow Goose features some appropriate dustings of snow; they're nice, but I will miss the ever-changing art of the original versions, and most especially the goose-in-a-pumpkin-patch one.) Pours dark mahagony and bright (nope, dammit, no yeast lees in the bottle) with rich head retention. A dry malty nose with a solid bit of roast there. Flavor: Very malty, dry, and biscuity, properly English, and lurking behind all that roast is that fruity ale yeast character that in the past has almost resembled fruit cocktail juice flavor. The hops linger in the finish. I'm almost anticipating a snowstorm outside as I finish this--that's how much the flavor has been conditioned into my DNA by now. Overall impression: a quite drinkable winter warmer, light enough on body to not demand a blizzard and fireplace but still hearty and dynamic. It'll never get anywhere among the disciples of the "extreme beer" movements, and that's largely why I dismiss such rantings as testosterone-driven folderol.

And now, for a special treat for the readers here--okay, for me, definitely, for you it depends how much you like living vicariously through me--out comes a dust-covered green bottle of 1994 Snow Goose!

Upon pouring, the vicinity fills with a nose of malty butterscotch! Heavens, I keep forgetting! Huge head, takes several pours to fill the glass and decant it. A deeper, slightly more opaque red, rich head retention. Nose depends on who's sniffing; a Beer Judge Certification Proram panel could go miles with some of the "off" scents and flavors of damp cardboard and diacetyl (hey, nobody planned this beer to be aged this long!), but I get notes of sherry and raisins, maybe a hint of tawny port, amidst a complex fruit cocktail. Flavors of light butterscotch, crystal malt, and stone fruit. My wife suggests that it smells vaguely like Samichlaus. Upon further sipping, the buttery notes of Ringwood become more prominent. The overall flavor and mouthfeel is hideously complex--like a watered-down Thomas Hardy's, as if someone designed a 6%-ish beer to totally offend a Bud Light or Natty Boh drinker. The overall finish is sweet and almost cloying, but still good in retrospect--and a final hint reminiscent of peat smoke (and I have a homebrewer friend who tosses peat into the fireplace now and then, so I know the real thing).

I polish off the last sips of the 2008 Snow Goose, and it seems like a total waste, like chugging a Sam Adams shot following a J.W. Lees Harvest Ale.

Please, Jim and Wild Goose/Flying Dog, I beg and implore you: go back to bottle-conditioning this damned beer, or at least start throwing us lowly peons a few firkins of this ambrosia. And if possible, stop filtering the character out of this Snow Goose, please!
Posted by Alexander D. Mitchell IV at 11/01/2008

The old Snow Goose from 1994-1996 remains my all time favorite beer. Its still good after switching breweries but definitely lost some character. I'd LOVE to find an old bottle to bring back the memories...