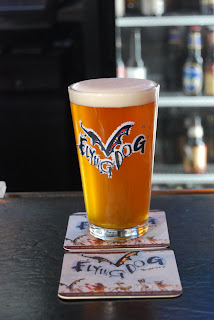 So how was the initial Flying Dog Fresh-Hop Ale?

Other fresh-hop ales I have encountered featured a strong to almost overpowering fresh-hop character, as if someone had picked several hop cones right off the vine, rolled them between the palms, dropped them in my glass or bottle, poured an IPA, and then wiped their palms on the sides of the glass for good measure.  If you're a "hop-head" (the colloquial beer-geek term for those who can never get enough hops in their beer), the experience can be wonderful,  If not, the notes of everything from citrus to cabbage can be overpowering.

The Flying Dog Fresh Hop Ale debuted at the Alonso's Baltimore Beer Week Preview Happy Hour was nowhere near as floral and "green" as many other fresh-hop beers I have experienced (including my own homebrewed variations).  Part of that is because the beer is very dry and "crisp," with a relatively "thin" backbone or mouthfeel relative to the flavors involved.  It had the hop flavors, but that of slightly dried or "sunburnt" hops rather than bright green cones many see growing on vines about this time.  I made a trip out to Stillpoint Farms, where the hops in the beer came from, and it was obvious the summer had not been kind to these specific hop vines--a lot of browned edges to the outermost cones of what was left unharvested at the end.

It's got a nice, strong, assertive hop character, and is crisp and almost a bit chalky.  But it's definitely American in style, lacking the nuances of a British/English yeast note, the bombastic nose of a "hop bomb" like Victory Hop Wallop, or the citrusy snap of, say, some of Goose Island's hoppier products.  Some drinkers at tonight's debut liked the drier notes of Flying Dog's beers over the maltier notes of a bottle of Goose Island Honker's Ale I bought from the bar to compare.  Try it for yourself, and decide (and comment below, if you desire).

(Disclaimer: The first glass was purchased for me by a Flying Dog representative.)
Posted by Alexander D. Mitchell IV at 8/31/2010

Likewise, I doubt this beer is going to replace Double Mountain's Killer Green as my favorite wet hop IPA/DIPA either.

Nevertheless, I have to applaud Flying Dog for supporting the local hop market (such as it is), and for making a beer such as this with locally grown hops. While it doesn't sound all that impressive (based on your review - looking forward to trying it if I have the chance), as a first time effort, I'm not all that surprised. Hopefully they'll continue to make this beer every year, and perhaps the beer will get better and better over time. In any event, kudos to Flying Dog for making this beer.

You know, between it being 1) a local brewery, 2) a brewery supporting local small farming efforts, and 3) a brewery showing the innovation to do something "outside the box", I would drink that beer as much as I could as long as it weren't anything short of toxic or wretched. But, of course, there are going to be a couple more such beers coming down the pike from Heavy Seas, Oliver's, etc., and it's going to be fun to compare, contrast, and argue over who did it "right" or best. Now, the chaps in DC might get the chance to be able to taste the Maryland and Virginia fresh-hop ales side by side, I dunno......

That's my feeling as well Alex.

From what I've read, not much of any of these local, wet hop beers was made. So I assume availability is going to be fairly limited, which is a shame. It would be interesting to try the beers side by side (even though I'm assuming the different breweries are using their hops to make different styles of beer), but I'm assuming that's not likely to be possible.