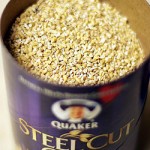 I've come to the conclusion that oatmeal, at least in the United States, doesn't get any respect, and for the same reason beer often doesn't get respect.

Instead of a good, hearty food, what most Americans know as "oatmeal" is that instant stuff upon which hot water is poured, or which is dampened in a plastic bowl with a rip-off cover and then microwaved.  It's either maliciously bland with the consistency of wallpaper paste, or it's jammed full of sugar and a mix of artificial and "natural" flavorings.  It's often made and doled out as cheaply as possible, with a big mark-up typical of almost all breakfast cereals. And this is the product most Americans accept as "oatmeal," as it's all they've ever known called by that name.

Whereas real oatmeal, such as steel-cut oats cooked gently for a half-hour or so, is full of rich, nutty grain flavors by comparison.  And it's better for you.  But you'll probably have to go to a specialty food store to find the stuff with which to make it, or to a high-end eatery.

I suspect all we need now is an "Oatmeal Lobbyist" website ("Respect Oatmeal") and "Oatmeal Connoisseur" and "Gruel" magazines....
Posted by Alexander D. Mitchell IV at 1/15/2012

Sounds like there should be a comparison of various oatmeal stouts and beers available. Perhaps a receipt to home-brew an oatmeal based beer.

It's steel-cut oats for this sassenach when he makes his porridge (& don't forget the Lyles Golden Syrup!) :-)

Porridge (Oatmeal) is very popular here in Ireland (as is nice strong wheaty beers). Nothing sets you up on a cold morning as a big heary bowl of oatmeal - and later that day a dark ale!

Grandpa Simpson is a subscriber to "Oatmeal Enthusiast".