Mysteries Buried In the Walls 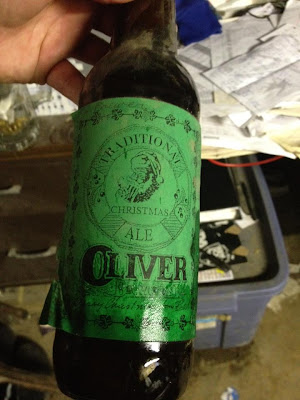 Stephen Jones, brewmaster at Pratt Street Ale House, has been reporting on a mystery uncovered in the brewery:


I've heard of dead cats being bricked into walls of houses to ward off evil spirits (or something like that), but this is a new one on me ... we're completely refurbishing our 7bbl fermentation room and when the ceiling was torn out we found this bottle (and yes, it's full) ... the bottling date is 1994! Sort of a brewery time capsule I guess!

A perusal of the original brewing logs (yes, they're still there) provided the original recipe, but not the full story:

It was bottled by the brewer of the time, Todd (couldn't make out his surname) on 12/30/94. I located the brew sheet ... pretty straightforward spiced Christmas Ale (pale, crystal and black malts & torrified wheat) but with way too much spice for my tastes ... I use less than half of the amounts of cinnamon, all spice & nutmeg in my Merry Ole Ale.. . . [original gravity] was around 1.058, but of course has been at ambient temperature throughout the years, i.e. hot in the Summer, cold in the Winter. . . . I certainly wouldn't want to taste it! 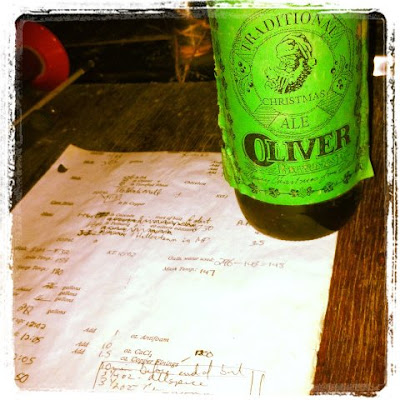 Barrett Lauer, one of the earliest brewers at what was then the Wharf Rat, confirmed that "Todd" was his immediate predecessor, departing on not-very-friendly terms, allowing Lauer to transition from kitchen to brewkettle--and the rest was history, for him and the brewery.

Tom Cizauskas has identified Harold "Howie" Faircloth III as the original brewer for the Wharf Rat when it opened in 1992.  Faircloth would later move on to open the Globe Brewing Co. on Key Highway in 1995, then on to Vermont, brewing at The Shed Brewery and Restaurant in Stowe (closed in late 2011), and now a co-owner of Green Mountain Distillers.