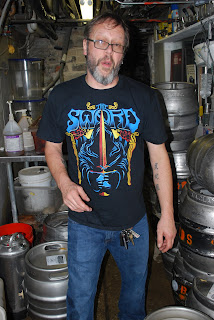 Yes, the third Baltimore Beer Week is over--and the industry folks who suffered through many long nights of work (see left) are no doubt relieved.

So how was it?

There were a few things different this year, including the wildly successful tours of the old Wiessner/American Brewery on Gay Street and the Walking Tour of Highlandtown/Canton that included a trip to the roof deck of the National Brewery Building.

The events were spread out far enough--you could find events going on from Annapolis to Mount Airy, and from Laurel to Bel Air.  In fact, my biggest regret was making the "diplomatic" decision to remain rooted to my blog's name, and stay inside the city limits, save for the BAM Oktoberfest at Timonium.  I know for a fact that I missed some excellent events at Kloby's, Victoria Gastro Pub, Hellas, Hop Heads, Frisco, and other places.  It's the inevitable downside to any such Beer Week: too much good beer, too many good events, not enough time or money, and human cloning hasn't been perfected yet.  And in spite of a "down" economy, I have yet to hear of any cancelled beer dinners

The Alewife/Heavy Seas dinner on Monday, October 10 was cancelled because they couldn't sell enough tickets. The menu looked fantastic, and the $65 price tag was reasonable. I really think there were too many events this year.

Unfortunately, I was out of town for a good size chunk of the event, but I nevetheless enjoyed the Sierra Nevada event at Max's, as well as the "locals" day event there the following Sunday.

I also went to the Stone/Troegs takeover at Alewife. While good, I was a bit disappointed by the tap selection (good, but the Scratch 45 was the only beer I saw that struck me as unusual and/or rare). Also, the tap takeover didn't start until 8:00, which I thought was a bit late in the day, especially for a Friday (I was told they had a bunch of leftover beer from prior events that they wanted to blow through first). Not surprisingly, as of 8:00 the place was absolutely packed.