SPBW at The Brewer's Art Thursday 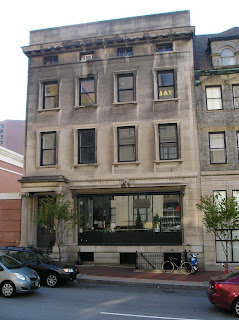 For all the quality Belgian-style ales it produces, The Brewer's Art in Mount Vernon is not known as a "real ale" or cask-conditioned beer location.  Belgian ales seldom lend themselves to cask-conditioning and handpumps, and the noted gastropub focuses most of its energy on house-brewing its ales and the limited production brewing (canned Resurrection and bottled Ozzy, Resurrection, Green Peppercorn Tripel, Le Canard, etc.).

Nonetheless, the Society for Preservation of Beers from the Wood's Chesapeake Bay Branch, having presumably recuperated completely from last month's Chesapeake Real Ale Festival, will be "meeting" at the Brewer's Art on Thursday, the17th, "beginning" at 7 PM.  In addition to at least one firkin (reported the dark Proletary Ale), the pub had on hand two house tripels (Ceberus and Sun Roi), the annual "Christmas beer" Festivus, plus more deliciousness, with Happy Hour running from 4 to 7.  (A note on the tripels:  They're a delicious straightforward respite from the rich complexities of Stillwater's saisons.)  Bar food is available; for the dining room, reservations are recommended.

Not enough for you?  Depending on your stamina, Liam Flynn's Ale House is a couple blocks to the north at North and Charles Streets, with two cask ales on handpump (most likely Oliver beers), plus an expanding array of ciders and Williams Brothers Ginger Brew from Scotland............

A gentle reminder that both The Brewer's Art and Liam Flynn's are withing walking distance of Penn Station, Light Rail, and the Metro Subway, and the Charm City Circulator takes you to both pubs (well, within two blocks of Liam Flynn's).
Posted by Alexander D. Mitchell IV at 11/16/2011