Regular readers here know we don't go about routinely telling them that they must try a certain beer.  Our assessment is that there's so much goodness out there that, as long as one practices proper discretion and looks in the right places, there's so much good beer out there in the Baltimore region that it's mostly a matter of personal preference, availability, and mood to find an experience far better than 90% of beer drinkers in America can readily enjoy (i.e. is it worth traveling to a venue with a cask beer simply to sample a beer on cask instead of in a bottle from a closer liquor store?  do you prefer a "hop bomb," an "alcohol bomb," or a "session beer"?). 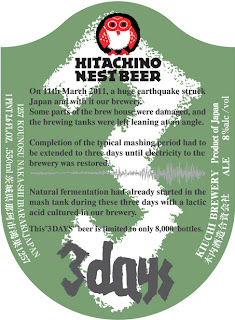 Every once in a while, an exception occurs.  In this case, it's Hitachino Nest 3 Days.

Right at the time the Kiuchi Brewery in Naka, Ibaraki, Japan--makers of Hitachino Nest brand beers, with the familiar owl logo--was mashing a batch of its flagship weizen-style Nest Ale on March 11th, 2011, they were struck by the now-famous tsunami-generating Tohoku earthquake.  Damage to most of the brewery was limited to some loose roof tiles, about 500 smashed bottles, 212 spilled gallons of umeshu (liqueur made from ume fruit), and the bottling line.   The brewery reopened as soon as power was restored, bottling water for regional residents for free distribution and cooking up meals for local residents in its adjacent restaurant, Nakaya.

The power outage from this quake caused the mashing process of the Nest Ale to be shut down.  Over the course of three days without power, the mash started to naturally ferment, with a lactic acid cultured by the process. Hitachino completed the batch, and bottled the beer. According to B. United, their importer, there were 8,000 550-ml bottles produced, as well as a scant few 30-liter kegs.  3,000 of those bottles were allocated to North America.

Max's Taphouse tapped one of those kegs Tuesday.  It was still there tonight.  This is an incredibly complex beer for 6.5%, somewhere between a hefeweizen and a Belgian abbey.  Is it worth the (likely to be steep) price that's going to be demanded for it among beer traders and collectors?  Maybe not, but why not steer around that hype and drink it on draft instead?

More about the earthquake's impact on Japan's breweries in the Sept./Oct. 2011 issue of Draft Magazine.
Posted by Alexander D. Mitchell IV at 1/19/2012

The label says 8%. Is the keg different?

I was wondering the same thing. The beer menu at Max's said 6.5%, and frankly I didn't get the impression I was drinking an 8% beer.

As Alex stated though, this is/was a very complex beer, and one I enjoyed quite a bit. It actually reminded me of Anchor's annual Christmas ale, what with all the spice, clove and cinnamon flavor I picked up. At least that's what I thought I picked up. :-)