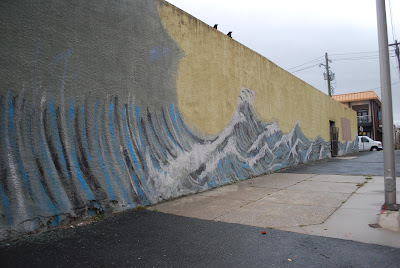 All right.  Go ahead.

Get it all out of your system.  Come on, blow it all out.

Meanwhile, this blog's author will point out, probably in vain, that the official list of names for hurricanes for 2012 alternates between male and female names for storms, and "Sandy" is between Rafael and Tony, so is officially a "she."  More on the subject of hurricane names here.

Back to our regularly scheduled news roundup:  Thankfully, the mural above, a half-block north of (and uphill from) Of Love & Regret Pub in Brewers Hill proved not to be a premonition.  As far as can be determined, none of the craft breweries or brewpubs in this area sustained any damage or power outages, although several bars wisely closed up early on Monday as the wind and rain intensified.  The biggest worry turned out not to be power outages or falling walls, but driving bans imposed by government during the height of the storm (although a former distillery warehouse, long disused, along York Road in Cockeysville had a partial collapse and will be demolished).

Rain put a serious damper on the grand opening of Gordon Biersch's new Harbor East location, which opened at 11 a.m. on Monday and closed six hours later.  Tuesday would be their first full day open.

Many people fretted about Union Craft Brewing, which sits inconveniently close to the Jones Falls and in the same neighborhood as a low-lying bridge prominently featured on TV newscasts because of the spectacle of churning water rising underneath it (because it's a low-lying bridge connecting two parking lots--duh!).  But there was nothing to report.  The owners were in on Tuesday, brewing as usual.  "We have to--the weekend parties drank all our beer!" joked Kevin Blodger.  (That wasn't far from the truth--the Friday bicyclists' visitation brought an estimated 1300 riders to the brewery's parking lot party, along with several food trucks.)

Max's Taphouse, which suffered a flooded cellar in Isabel several years ago, was prepared for the worst--which didn't happen.

Heavy Seas shut down production for Tuesday.  Flying Dog cancelled evening shifts for Monday but resumed production Tuesday. Even Dogfish Head, much closer to the "action" in Rehoboth Beach and Milton, came through unscathed after boarding up early and closing on Sunday, according to their representatives.

Closer to the action yet, "nanobrewery" Cape May Brewing in Cape May Court House, New Jersey, lost little more than a sign and some power, and even opened up their tap room for service as the storm was approaching.  Slightly to the north, Tuckahoe Brewing in Dennisville has not been heard from yet.

As much as folks may be tempted to just sit back and crack open another beer, it bears repeating that many, many others didn't fare as well.  Thousands, if not millions, are still without power or transportation, and many folks have lost everything--not just a vacation home or rental investment.  Keep your fellow Americans in your thoughts, prayers, and donation allocations.