Yes, this is going up a bit late.  Short notice/approval combined with busy people.

Humanim, the owners of the former Wiessner/ American Brewery at 1700 North Gay Street, will offer tours of the historic building for Baltimore Beer Week on Sunday, October 28th from 11 a.m..to 1 p.m.  Actual tours will be given every half-hour; last admission will be at 12:30 p.m. 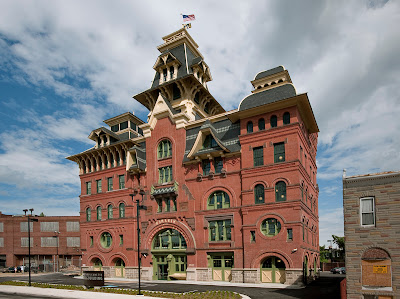 The Wiessner Brewery, or American Brewery as it was later known as, is perhaps one of the most iconic jewels of Baltimore's brewing and architectural history and landscape, so much so that its image was heavily used by Baltimore Beer Week to promote last year's "theme" of the history of Baltimore's beer scene.

The building remains not only a monument to the development of brewing, one of Baltimore's major industries in years past, but also to the Germans who worked and lived in the area. John Frederick Wiessner, a German immigrant, leased the land upon which the current complex sits in 1863 in order to erect a brewery. Although there were already twenty-one breweries in Baltimore City and Baltimore County at the time, Wiessner's brewery rapidly expanded, employing many Germans that had been brewers prior to their emigration to America. In 1887, Wiessner constructed the present building to enlarge and modernize his brewery.

The height of the building and the internal organization of space were determined by the requirements of brewing, but its spectacular exterior reflects the tastes and decorative detail popular during the Victorian age in which it was built. Later renamed the American Brewery, it was one of the largest and finest breweries in the state. The Wiessners were forced to sell during Prohibition; it reopened in the 1930s under the American Brewery name, and the Allegheny Beverage Company was the last company to occupy the brewery.  In the mid-1930s, a modern brewery was created behind the old facade. "American Beer" was produced here until 1973, the same year the building was listed on the National Register of Historic Sites. The building was deeded to the City of Baltimore in 1977.

The building, which became part of a large city-owned conglomerate of properties in the neighborhood, sat vacant for three decades--aside from occasional covert use by the Baltimore City Police Department as an observation post for drug investigations--until November 2007, when Humanim, a Columbia-based nonprofit that provides work force development for the disabled, purchased the property for $2,500 from the city.  The owners of the American Brewery complex in East Baltimore then secured $22.5 million in grants and financing to renovate and develop the Brewery building, totaling 30,000 square feet, in what was then one of the city’s most blighted neighborhoods. Streuver Bros., Eccles, & Rouse were the developers chosen to make the combined renovation-and-preservation project a reality.

Renovation of the building was completed in May 2009, and Humanim's offices opened shortly thereafter.  In spite of beer having nothing to do with the non-profit's mission, Humanim and the site's developers have been especially sensitive to the building's heritage.  Two display cases in the main lobby hold artifacts from the brewery's history; several significant details, including a grain elevator, have not only been preserved, but showcased in a sensitive manner; and even a brewing kettle has been "carved" into a conference table nook.  Added value: potential spectacular views of the city from one of its highest accessible points!  Bring your camera!

Visitors will be welcomed at the building beginning at 11:00 a.m., and are asked to park on the building site and/or at overflow lot at the corner of N. Gay Street and Patterson Park Avenue (see the blue parking area on the map; click on the map for an enlargement).  A television in the reception area will show a slide show depicting the extensive renovation process undertaken in 2008-2009.  Tours of the building, lasting a half-hour each, will commence at 11 a.m., 11:30, noon, and 12:30.  No additional visitors will be permitted after 12:30 p.m. 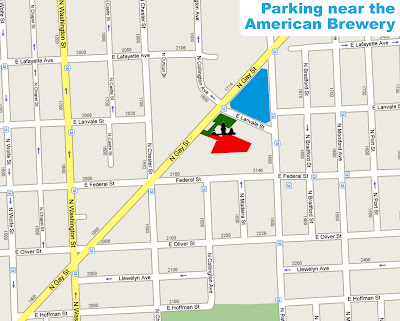 Also scheduled for that day are the Walking Tour of Brewer's Hill (limited to 50 participants), which will allow you to visit two former breweries in the same day. Also that day is the Union Craft Brewing party at their brewery in the historic Clipper Mill/Woodberry neighborhood.

Humanim's own web page about the building, with links to far more information, is here.  More on the brewery's history here and here.