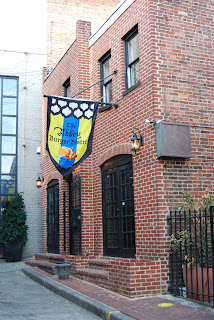 This little hideaway has appaently stayed hidden from me--both literally and figuratively--for several months now, so here's a long-overdue look:

The Abbey Burger Bistro opened in November in the former Sky Lounge location at 1041 Marshall Street, that little cul-de-sac alley running north from Cross Street right near Ryleighs (the former Sisson's) and north of the Cross Street Market. It does one thing: burgers, albeit a nice variety of same. You have a choice of a "build-it-yourself" burger with a bewildering variety of toppings at various prices (some free for the asking), or a couple house specialty combos at a fixed price (usually $9). Among the choices are extra-low-fat local bison burgers, lamb, mushroom "burgers," and an excellent veggie burger (my wife speculates it was house-made, definitely not the typical mechanically-made frozen patty, with a loose texture akin to a crabcake). Burgers are served with house-made potato crisps, seasoned with the now-ubiquitous rosemary and salt (not sure I tasted garlic there). Sweet potato fries came dusted with pretzel salt for a sweet-salty taste rather than the extra-sugary treats seen at some other places.

The beer menu, updated weekly, had 52 premium bottles, 13 drafts (on two levels), six premium cans (three of them Oskar Blues beers), and seven North American industrial lagers (including Yuengling). So how "abbey" is the place? Not that much--I counted two Belgian drafts, one Unibroue draft, and two Ommegang drafts, as well as ten Belgian bottles and one bottled Unibroue. Lagunitas seems to be the house specialty at the moment, with $3 Lagunitas drafts during happy hour today.

Another specialty of the house is $7 "adult" milkshakes, with a variety of liqueur additions (Grand Marnier, Godiva, Jamesons, etc.).

The website invites feedback, including suggestions for beers. I slipped in fairly incognito and just ordered food and a soda, but was spotted by someone wondering where I was during the Belgian Fest. Sheesh.
Further up (or down) Cross Street, the Pub Dog/Dog Pub is currently pouring a Belgian White and a Porter, as well as still providing an occasional firkin to the other bars in town. A little further still, there's a new Australian-themed place called Billabong's in the former Turner's. The bad: of course, it thinks it has to have Foster's. The good: they also stocked four bottled beers from Barons of Australia. It's still a work in progress, with renovation continuing upstairs, but it shows some promise, to say the least.
Posted by Alexander D. Mitchell IV at 2/26/2009