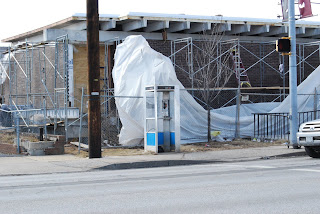 The Washington Post ran an article a while back on what was believed to be the last stand-alone phone booth in the metropolitan D.C. area, in the Clarendon neighborhood of Virginia. It's gone now, but that had me paying attention to the few remaining old-style booths in the Baltimore region.

For a while, I thought the last one--at least the only one I could find--was outside St. Agnes Hospital on Wilkens Avenue, but that one disappeared a couple weeks ago.

The other day, I discovered another one on the 6300 block of Reisterstown Road, outside the Pratt Library branch under reconstruction. The phone line is apparently dead, and it appears from what I saw that this box survives more as a bus stop shelter than anything else.

Any others in the Baltimore area? We're talking outdoor four-sided boxes, not kiosk stands or indoor booths like in the Hotel Belvedere. Bonus if the phone works. [UPDATE: I can't find the ones that used to be in the Belvedere. A victim of remodeling, or just faulty memory?]

If arcane roadside trivia like this interests you, I heartily recommend Baltimore Ghosts by Adam Paul, a website FULL of odds and ends still located all over Baltimore.
Posted by Alexander D. Mitchell IV at 2/26/2009

there's one on Falls Road, just north of Princeton Sports.

I have noticed a couple of remaining phones (no booths) around Canton. Surprised me as well.

It looks like it's gone now... The search for the last booth goes on !