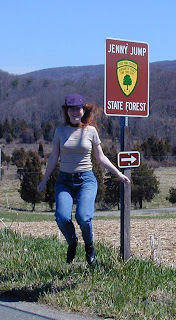 Once every four years, we get a February 29th.  So what should you do for Leap Day besides have hoppy beers?  (Well, that or go to Lover's Leap or whatnot.....  I was joking about taking my wife to Jenny Jump Mountain in New Jersey. [see photo].....)

But there are a couple options for you today, starting with the debut at Alewife Baltimore of Stillwater's latest brew, Kopstootje, brewed in  conjunction with Lucas Bols and based on the dutch ritual of the Kopstootje, the unique Dutch centuries-long tradition of a beer and a shot of Bols Genever.  8 PM to 11 PM.

The Baltimore City Paper has a cover story in today's edition on bottle collectors--including beer bottles, naturally--who pursue their passion the hard way, by digging in former privy sites.  Check it out.for yourself by grabbing a copy from the ubiquitous yellow boxes, at your favorite bar or store that carries it, or here.

Meanwhile, peruse this list from Max's Taphouse.  Sprecher, like Leinenkugel's, hasn't gotten much attention in this market of late, but samples tried by this writer at a recent trade show show their offerings to be on par with the best of Sam Adams, Stone, New Belgium, or any other of the "big boy" craft brewers.  Meanwhile, Oskar Blues' new beer is a grandiosely-hopped version of their flagship Dale's:::