Yeah, technically some would call Racer's Cafe and Red Brick Station "Eastern Baltimore County," but generally that term is used for the territory immediately to the east of Baltimore City--Dundalk, Essex, Middle River, Chase, and the other areas below Interstate 95 that garner about as much respect as Rodney Dangerfield ("As kids, we played hide-and-seek.  Nobody came to look for me!").  And if you've ever headed northeast from Highlandtown, your only good-beer respites have involved lengthy detours to Red Brick Station or DuClaw, at least until you get to State Line Liquors or Newark's Iron Hill Brewery. 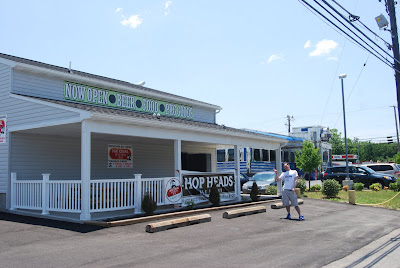 But with a name like Hop Heads, you know there has to be a beer geek involved.

Sandwiched between the Silver Moon Diner and the Colonial Inn  on the soutth side of  Rt. 40/Pulaski Highway at Middle River Road in a nondescript, easy-to-miss building, the relatively new bar (a couple months old) looks like just about any North-American-industrial-lager-fueled "dive" along that highway.  But inside this somewhat plain bar, customers will find four taps and a cooler filled with bottles of craft beers, including Troeg's, Victory, Heavy Seas, and even a few Belgians.

This is apparently still a work in progress, but thus far the initial appearances are promising.
Posted by Alexander D. Mitchell IV at 6/17/2011