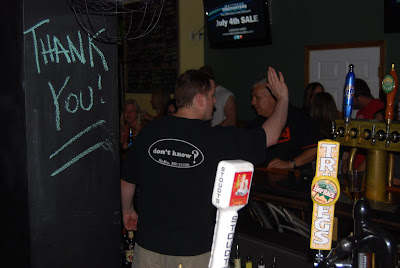 As previously announced, Don't Know Tavern has shuttered as part of its sale.  Owner Jason Zink was waxing philosophical as he attempted to clean out inventory, offering up free wings and hardshell crabs yesterday, as well as free beers as long as supplies held out (even Brewer's Art Green Peppercorn Tripel, Troeg's Hop Back,  and Victory Weizenbock).  Zink pledged to take the craft beer scene back to his No Idea Tavern nearby; "It'll be better than ever when we're done."  UPDATE:  New management is stating via Facebook that they'll be reopening under new management on Wednesday, with samples of new menu items.

Meanwhile, another craft-beer location is also closing: Muggsy's Mug House will serve its last beers Thursday, marking the end of the month and lease.  Manager Danny Young described the closure as amicable, hinging on a disagreement between partners as much as the competition.  "If you gotta close down a bar, it couldn't happen in a nicer way," say Young.  "[The landlord] was as nice as you could be about it, and we're coming out OK financially.  I'm staying in the neighborhood, and you'll be seeing me at other bars around here," he said while wearing an apparently new Ropewalk Tavern staff shirt while helping out Zink for a couple hours at Don't Know.
Posted by Alexander D. Mitchell IV at 6/27/2011

Oh man, just reading this. Was in Baltimore about a year ago & on the hunt for Schaefer beer. Connected with Danny via Twitter & had a couple of Schaefs at Muggsy's. I'm returning to Baltimore in early October & had planned to return there. Guess I'll have to find a new Schaefer haunt.