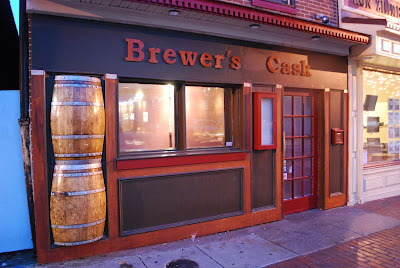 The location at 1236 S. Light Street, across the street from the Light Street Branch of the Pratt Street Library, should hold a soft spot for craft beer enthusiasts in South Baltimore, if not all of Baltimore.  But it's had a somewhat troubled history.

First, it gained attention as Ken Krucenski shifted his Irish-themed Sean Bolan's into a craft-beer emporium, adding twenty draft lines and a multitude of craft bottles to turn the bar largely away from its Guinness-and-shamrock trappings into a well-regarded craft beer emporium.  Ken's personal life ended up taking precedence, however, and he sold the bar in October 2005 to a team that reopened the place as Clayton's, an upscale-aiming restaurant that paid little attention to its beer line potential.  That place folded after a year or so, allowing Krucenski to reclaim his real estate and offer the modestly redecorated bar for lease.  Local bartender Danny Young took up the call, opening the bar as Muggsy's Mug House, in early 2008, focusing on servings of craft beer in the 10-ounce mugs once used by Sean Bolan's to offer three-mug beer samplers (a technique pioneered by the original Wharf Rat in Fells Point and still in use by Mahaffey's in Canton).  Young gave it a valiant effort for three years, but closed in June 2011.

Now a pair of partners have purchased the location, and are feverishly rehabilitating the interior for a projected opening before Christmas, possibly a soft opening early next week.  And with a name like The Brewer's Cask, you know they are aiming at the craft beer market.  Indeed, the bar's slogan is already "Love thy beer".

According to one of the owners:

Sigh... it will be difficult for any place to ever come close to replacing Ken K. and Sean Bolan. Back in the day, I used to frequently run into patrons there who had driven many miles to visit SB, having heard about it's incredible draft and bottle selection. Some of the events there rivaled what one could then find down in DC at the Brickskeller.

Oh well, enough about the old Sean Bolan's. Here's to the new Brewer's Cask, and a successful run at the 1236 Light St. location.

Thanks for posting he article and the website Alex.

Finally heard back from them (Kenneth Kugler). He indicated they're shooting for this weekend as an opening date, but otherwise look for them to open some time later in the week, next week.

According to Mr. Kugler, they now have a facebook page and will announce their grand opening there.