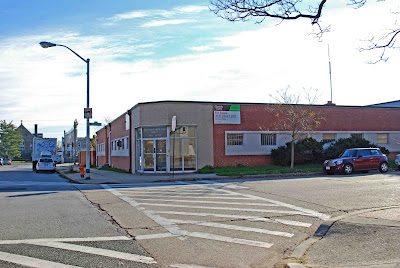 This writer has been sitting nervously on this story awaiting official confirmation and a chance not to "jinx" the story, but it just snuck out this morning in the Baltimore Business Journal, so....

Baltimore-Washington Beer Works, makers of The Raven, and Oliver Breweries, of Pratt Street Ale House and Wharf Rat fame, are in negotiations to take over the old Beverage Capital Corp. building on 401 E. 30th St. in the Waverly neighborhood of Baltimore. They would do so under the auspices of Charm City Brewing Co., a new company being formed by J. Hollis Albert, a consultant with BWBW and a former owner of Operators Energy Services, a Baltimore-based fuel-supply company that sold its business to Carrol Fuel in 2003.

The goal of Charm City Brewing would be to form a type of co-op that would help some of the city’s smaller beer companies increase their distribution and bottle their beers, Albert said to BBJ.  The company would brew in new equipment to be installed in the long-vacant former beverage-packaging and distribution facility, which just happens to sit on a block that formerly housed a predecessor Oriole Park, built in 1916 and burned in 1944.  (As the Wikipedia article explains, there have been a number of "Oriole Parks."  After the blaze, Orioles games moved to Municipal Stadium on 33rd St., and then to the new Memorial Stadium in 1950.)

As planned, Albert's brewery would contract brew and bottle for The Raven until BWBW completes its planned brewery and pub in Highlandtown, and also for Oliver Breweries, in part in order to take some of the strain and pressure off of Oliver's head brewer Steve Jones, who calls himself "The Hunchback of Pratt Street" for his claustrophobic work environment at the Pratt Street Ale House.  Albert also entertained the idea of other local breweries or bars, such as The Brewer's Art, using the brewery for commercial-scale production and distribution.  (Tom Creegan, one of the Brewer's Art's owners, said in response "We have never negotiated or had any conversation about this new project.")

The proposed brewery has received zoning approval from city officials, with no neighborhood opposition.

Justin Dvorkin, owner of the Pratt Street Ale House, was enthusiastic about the possibilities of the new partnership.  "It's a great idea, if everything comes together.  We've been looking for a way to expand out of this building ever since we acquired it [from Bill Oliver], and this looks like a good way for us to move forward.  And, yes, to spare Steve's back a bit.  It's a great facility--it's already laid out for beverage production, so putting in a brewery is going to be easier than most places."  The planned partnership would allow Oliver Breweries to expand its distribution with bottled beer in retail markets, something the former Wharf Rat experimented with twice, both times briefly.  (You're a true veteran of the Baltimore craft beer scene if you remember the original bottled "Oliver Ale" cranked out at Wild Goose Brewery in Cambridge, with green bottles!)

Stephen Demczuk of BWBW told the BBJ that his beer is currently distributed in five states, and that his current contract brewer, Clipper City Brewing Co. in Halethorpe, doesn't have enough room to continue brewing The Raven with its own increased production.  "I can't get any more beer there.  It's as simple as that.  I could triple my [production] volume, but I can't.  So I'm losing revenue as a result."