Lost in the Anniversary of the Repeal of Prohibition..... 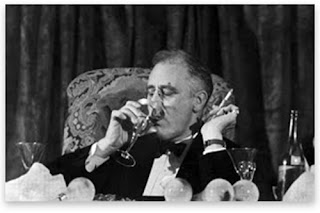 Folks seemingly seeking any excuse possible to hoist a celebratory drink have glomped onto the anniversary of the ratification of the 21st Amendment to the U.S. Constitution, Dec. 5th, 1932, when Utah became the 36th of 48 states to approve it.  (Even though, as noted by many a party-pooper, myself included, this simply passed the regulatory powers to the local level--as much as half the nation emerged still under some form of "prohibition" for months or even decades later.)

Lew Bryson pulled up this New York Times website page showing the news in that paper that day.  And buried under the big news in that article is an ugly truth for those wishing to deify Franklin D. Roosevelt for his role in the end of Prohibition:

.... FDR wanted to not only outlaw bars, but impose government control of liquor distribution:


Mr. Roosevelt asked personally for what he and his party had declined to make the subject of Federal mandate -- that saloons be barred from the country.
"I ask especially," he said, "that no State shall, by law or otherwise, authorize the return of the saloon, either in its old form or in some modern guise."
He enjoined all citizens to cooperate with the government in its endeavor to restore a greater respect for law and order, especially by confining their purchases of liquor to duly licensed agencies. This practice, which he personally requested every individual and every family in the nation to follow, would result, he said, in a better product for consumption, in addition to the "break-up and eventual destruction of the notoriously evil illicit liquor traffic" and in tax benefits to the government.
The President thus announced the policy of his administration -- to see that the social and political evils of the preprohibition era shall not be revived or permitted again to exist. Failure of citizens to use their new freedom in helping to advance this policy, he said, would be "a living reproach to us all."
He expressed faith, too, in the "good sense of the American people" in preventing excessive personal use of relegalized liquor. "The objective we seek through a national policy," he said, "is the education of every citizen toward a greater temperance throughout the nation."
As a means of enforcing his policy, the President has the Federal Alcohol Control Administration ready to take control of the liquor traffic and regulate it at the source of supply. [emphasis added]

Just a reality check, y'all.  Remember that if FDR had his way, you wouldn't have a saloon like Mahaffey's, Max's, Baltimore Taphouse, Alonso's, Racers, Frisco, TBonz, etc. in which to hoist your toast.
Posted by Alexander D. Mitchell IV at 12/05/2011