Two beer bars in Howard County have recently expanded their draft beer offering substantially, to the point where Howard County, once a "wasteland" for craft beer with but one very good beer bar, the Last Chance Saloon in Columbia, now has three bars with substantial draft offerings fighting for the attention of beer connoisseurs, not even counting the "brewpubs" in the Ellicott City and Savage Mill areas. 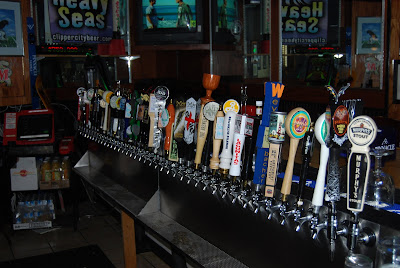 T-Bonz Grill is almost striving for the "hideaway" status formerly held by The Last Chance Saloon in Columbia's Oakland Mills "neighborhood" (now the Second Chance).  Tucked in back of a strip mall along Rt. 103 (Montgomery Road) and Rt. 104 (Waterloo Road) in an area generally considered the southern suburbs of Ellicott City, T-Bonz has been creeping its way up the craft beer bar ladder, starting with 15 quality beers on draft.  Earlier this month, they broke out of that mold by expanding to 40 drafts, complete with a chalkboard menu listing the beers and alcohol strengths.  In addition, the bar offers a "sampler" of four small glasses of any of their drafts for $6.50. 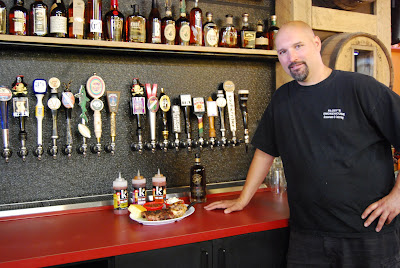 Concurrently, Kloby's Smokehouse, off Rt. 29 on Montpelier Road near Burtonsville and Johns Hopkins University Applied Physics Lab, is similarly expanding, more than doubling their capacity and beer offerings.  Their "soft opening" was yesterday, sort of accidentally when they didn't block off the new section of the bar and folks started lining up while they were still setting up and testing the new draft lines, according to owner Steve Klobosits.  (Minus the one that was still leaking when I left, they should be up to 32 drafts--20 on the new bar, plus 12 at the older one--when all is done.  Plus pretty dang good barbeque.)  They should be at least are ready to handle the weekend crowds this weekend.
Posted by Alexander D. Mitchell IV at 6/23/2011