This post will be updated as news arrives.  Check back often.

The Phoenix Emporium in Ellicott City got hit by flooding Wednesday, with a flooded cellar, but was open Thursday night, according to their Facebook page.


Ellicott Mills closed earlier in the week due to flooding in Ellicott City. Bill Pastino reported up to two feet of water in the basement, but that would only affect the Ratskellar, which is likely to remain closed until the rains are done and the downstairs has a chance to dry out. The rest of the restaurant would remain open whenever possible in this weather.

Up in Pennsylvania, the Riverhouse Pub in Montandon, Pa. was flooded, but due to a dispute between brewer Bart Rieppel and the restaurant management, Rieppel had removed his brewing equipment, reportedly the week before.  Selin's Grove is reported as being out of danger for the moment (the record-setting 1972 flood didn't quite reach the alley on which the brewhouse sits); we await reports on Old Forge in Danville (in a low spot on Danville's main street, too close to Mahoning Creek) and others.

Report from Troegs in Harrisburg and Hershey:

We lost power in Harrisburg yesterday morning (Thursday) around 9:30 a.m. We evacuated the brewery around 1 p.m. after loading 4 trailers full of packaging, merchandise, files, computers and anything else that would fit. We put all hops, barley and a lot of the of beer up on pallets to get it above two feet level inside the building. They lowered the crest level by two feet overnight (currently forecasted for 26.5 feet), so we hope we are ok, but the entire brewery is surrounded by water and we won’t be able to get in there until Monday at the earliest.
No problems in Hershey – except for a lot of road closures that won’t allow us to get trucks into the building.

This just in from Appalachian in Harrisburg: 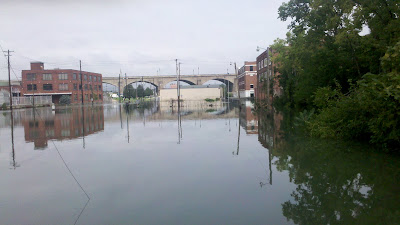 Don't worry, the beer has been protected.  We never lost power.