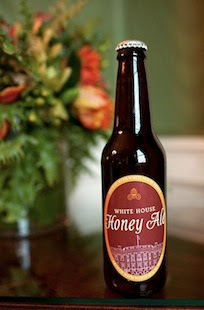 Remember this earlier question about the beer Obama had with a Marine recipient of the Medal of Honor?


President Obama quaffed beer with 23-year old Medal of Honor recipient Dakota Meyer on Wednesday, a day ahead of presenting the former Marine Sergeant with the Medal of Honor on Thursday. Turns out the beers for the Oval Office patio chat were some of the special homebrew the White House chefs have been making since last January, a White House spokesman told Obama Foodorama. The President served Meyer, the first Marine to receive the Medal of Honor since the Vietnam war, White House Honey Blonde Ale.