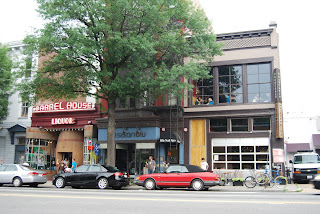 If you read about James Watt of Brewdog in the latest issue of Mid-Atlantic Brewing News and missed his Baltimore appearance in March, you have another chance to see him coming up--albeit in Washington, D.C. instead.

Watt will be appearing (along with many of his brewery's beers on draught and cask) at ChurchKey, the upstairs beer bar at 1337 N. 14th St. N.W. (several blocks' walk north from the McPherson Square Metro station on the Red Line), on Wednesday from 6-9 PM.  (Upper right in the photo.)

Thanks for linking to Y&H, Sandy. We're doing a whole series on BrewDog this week. Part 1 and Part 2 are up.