I love it when decent beer places show up away from the craziness of Fells Point, Federal Hill, and Canton. 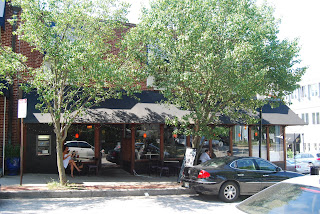 The Falls is an all-day cafe, open from 7 AM to 9 PM (note--closes earlier than the typical bar!), and boasts a decent sandwich-heavy menu and kitchen, with prices and food selections somewhere between a good diner, "pub grub," and an upscale bistro--the most expensive thing on the menu is an $18 bison sirloin entree.  Originally conceived as a wine bar, the place has added ten craft drafts and a scant few bottled beers, but it's possible that could evolve as Baltimore Beer Week gets closer--it's got one of the best potential seating venues for a beer dinner I've seen in Baltimore, and I'm dropping hints to the various beer distributors.  If you like Grand Cru, you'll like this place as well.  And if you don't like it, the Mt. Washington Tavern is literally a short stone's throw away, as are a couple other well-regarded food establishments, including Chiyo Sushi, a crepes shop, an ice cream parlor, and a pizza-and-sub shop.  And Whole Foods Market is but a short walk from the other side of the Light Rail station.

I see a LOT of potential in this neighborhood.
Posted by Alexander D. Mitchell IV at 6/23/2010

Having recently moved to Mt. Washington I was very happy to discover the Falls (thanks to a tip-off from Volker @ Brewer's Art). The food is great and it has a good beer selection (especially considering the limited number of taps) and quality wine list too. I've had the pleasure of meeting one of the owners (Tim) who was knowledgeable and enthusiastic about his beer. Great place.

Yay I just literally wrote a post about this place too! I really love this place! There's just something so inviting about it. It also helps that I LOVE sandwiches, and as you said, their menu is made up of a ton of them :)