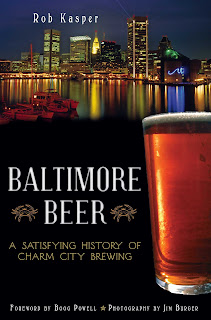 New breweries aren't the only thing coming out in bunches these days in the Baltimore area.  Fast on the heels of the recently-released Maureen Prey's Brewing in Baltimore comes Rob Kasper's Baltimore Beer: A Satisfying History of Charm City Brewing.
Those of you who have lived in the Baltimore area for many years and read the Baltimore Sun will readily recognize that Kasper was, for all practical purposes, the Sun's beer columnist disguised as a roving reporter and columnist.  Hardly a season or month went by without Kasper somehow managing to eke out an article or column mentioning either the local craft beer scene or the changing beer industry and market.
Officially the book is to be released tomorrow, but Kasper and his publisher are busy arranging for book-signing events in local bars and bookstores; one is tentatively slated for the Pratt Street Ale House on June 10th.  A review copy is supposedly in the mail to Beer In Baltimore world headquarters.


(Disclaimer: this photographer provided several of the photographs in the book.)
Posted by Alexander D. Mitchell IV at 4/12/2012