Completely OT Rant: Why Do I Have This Cell Phone?!? 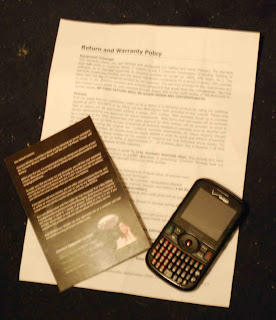 I want to believe the government programs to ease access to cell phones, as a modern, hardwire-less way of doing what they used to do 30 years ago to bring phones to rural areas and to the working poor to bring them up out of poverty, help get and keep a job, keep in touch with police and family, etc., is a Bloody Good Idea.

We received a box today from one of those "Free Cell Phone if You're On Government Assistance" companies, One of many that seemingly set up card tables at random curbside spots every day across this city, looking only a little more professional (if that) than the pirate-DVD bootleggers selling out of suitcases. Addressed to this address, to a name my wife and I have never seen before "Or Current Resident". With a cell phone, charger, and documentation, set up for Verizon Wireless with 100 "preloaded" minutes and a phone number written on the documentation.

This phone is arguably nicer than my current Not Really A Major Telecom Company pay-as-I-go phone, and blows Dick Tracy's old wrist TV radio out of the atmosphere. Someone's supposed to be getting this for free, and it's being paid for out of the Universal Service Fee (i.e. a tax) you and I all pay for phone service. My wife and I don't happen to qualify, as we don't get food stamps or any of the other multitude of assistance programs that qualify you. (If we applied for winter heating bill help--even just a token amount--we'd probably qualify.) Instead, like rubes, we just pay for our cell phone service as we go like any rabid free-market chumps, and use them frugally and only as necessary.

So now I'm stuck trying to decide whether to try and return it, forward it, use it up and return it, use it and see if it automatically renews, or hack it so it'll work with my hideously cheap (because I use it so little) Not Really A Major Telecom Company service and I can transfer my years-old cell-phone number to it. All appear to be possible options.

And this has apparently been going on for NEARLY TWO YEARS: http://consumerist.com/2010/06/i-dont-want-this-random-government-subsidized-cell-phone.html

Seriously. WTF?!?  They apparently don't even care if the person who requested it gets it?