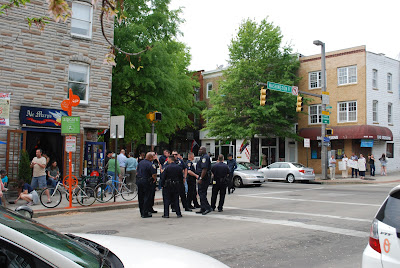 An average of four protestors for the hour.  An average of five police cars and 12 or more police officers, present because Ale Mary's and supporters had presented evidence of suggestions/threats of illegal acts made on the Facebook pages opposing Ale Mary's and/or for the protest.

And, apparently by instruction from the police, they were restricted to standing across the street.  (This is not the first time this writer has seen such restrictions upon bar protestors; a similar order was directed to protestors opposing a paid speech by Irish Republican Army member Gerry Adams at Mick O'Shea's years ago.)

So they were standing under the awning of--wait for it--Bad Decisions. 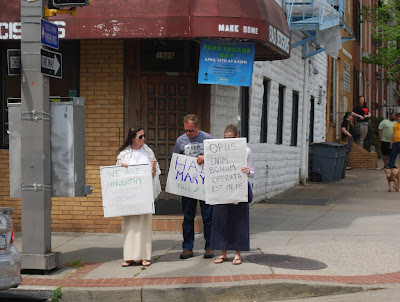 That is really all that needs to be said.

The bar had specials on Flying Dog's new Disobedience, Monty Python's Holy Grail Ale, and Maudite ("Damned" or "Condemned" in French) on draft, as well as a "Gluttony Tots" ("Tater Tots" covered in gravy) special.  Patrons filled the bar and surrounding sidewalk for the "free entertainment." 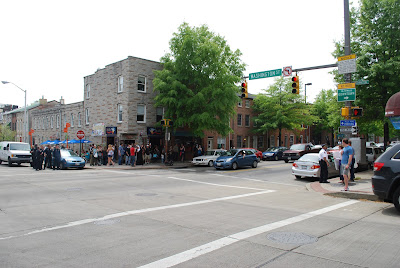 hold on a minute ... I thought that the protesters Facebook page was "500, 000 against ... ", what happened to the other 499, 996? What a ridiculous waste of police resources in a city where they are already so stretched!

Well it was a Sunday, guess they spent the day in church.

No, it was a Saturday. The same Saturday as the nearby City Paper Brew Fest.