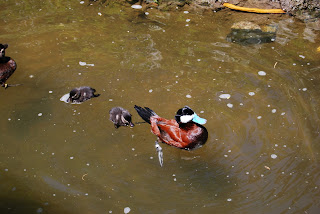 The new Ruddy Duck brewpub in Solomons, featured in the latest issue of Mid-Atlantic Brewing News, opened its doors earlier this week in a soft opening. Two house beers on hand, their Belgian White and a golden ale. More beers are reportedly on the way, along with guest beers rounding out the taps for the time being.
(Photo of a ruddy duck at the Maryland Zoo in Baltimore, taken during Brew at the Zoo 2009)
Posted by Alexander D. Mitchell IV at 6/12/2009