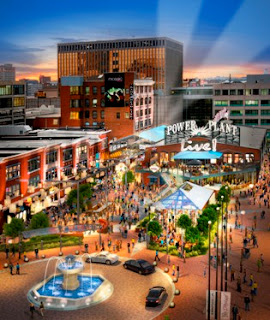 The Baltimore Sun's Erik Maza (on his Midnight Sun blog) and the Baltimore Business Journal's Ryan Sharrow report on plans by the Cordish Company to overhaul the Power Plant Live complex on the east side of downtown north of the iconic waterfront Power Plant building.

Included in the refresher plans are Leininkugel's Beer Garden, a 3,500-square-foot plaza which will be serving 40 "craft brews" and is expected to open in July, and a second location for Station North's Joe Squared Pizza, which will occupy the former Two Boots Pizza location when its lease expires.  (The Station North location, as many know, has a superior selection of craft beers than most "pizza joints;" a person who answered the phone at the Station North location in the owner's absence said that they do plan a similar good-beer strategy at the new location.)

In addition, Luckie's Tavern, already a presence at the plaza, is expanding with a second stand to be called Luckie's Liquors, which expects to offer about 75 bottled beers.

The combined new venues will bring the Power Plant Live back onto the craft-beer radar scope, years after the now-iconic Ram's Head Live largely abandoned its "brewpub restaurant outlet/music hall" strategy and focused most of its energy into being a concert venue that also served beer.