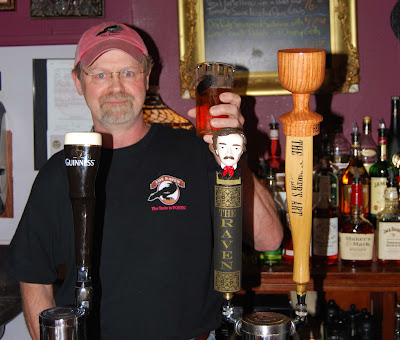 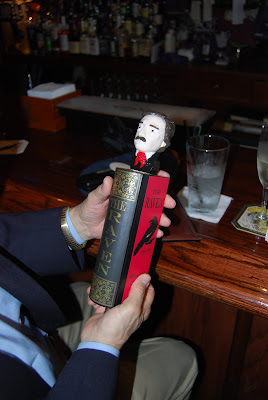 Stephen Demczuk of The Raven Lager toasts the first of his new tap handles, designed and crafted by Mark Supik & Co. and featuring a sculpture of Poe crafted by Danielle Craven-Slaski.  As can be seen in the lower photo, the handle incorporates the shape of a book of Poe's "The Raven".

This is a VERY limited run of tap handles, but Demczuk indicated that any hard-core collectors could contact him via the Raven Beer merchandise site (where there's already plenty of other stuff for the Poe or Raven fanatic--and no, we don't mean purple jersey-wearing folks) and inquire about a direct purchase (expect the price to be around $75, including shipping, I would speculate).

Meanwhile, in other news, Demczuk let loose rumors of a pending project that will no doubt excite many in the Baltimore and Maryland beer community.  The rumored project is still supposedly in the embryonic stage, but negotiations and explorations are happening.  We'll let you know if things pan out.
Posted by Alexander D. Mitchell IV at 5/24/2011