The Only Beer Of Its Kind In Baltimore

If you've read this blog for amy length of time, you know that it's less an egotistical (i.e. "me me me me me me") blog than it is just an information-sharing resource.  I don't post a cell-phone photo of every beer I drink; I don't see how many words I can write about every beer I taste; and you can't track my movements from my blog posts or Facebook updates.

But every once in a while, I bend that axiom.

Besides beer, I am a railroad buff.  Geek.  Historian.  Look, you think I know beer?  You think the character of Dr. Sheldon Cooper on The Big Bang Theory knows trains?  Well, they have nothing on my knowledge of railroads.  My first published beer article was a very lengthy exposition on railroad-themed microbrews for Railfan & Railroad Magazine many years ago, followed a couple years later by a follow-up article on the same subject.  I found every railroad-themed beer name, label, and brewpub in the nation at a time when we had to do it by telephone, not by an internet search.  I found several brewpubs and breweries in railroad stations, including the then-fledgling New Belgium Brewing Co., then located in the old Fort Collins, Colorado Union Pacific passenger station (later a restaurant and last reported as under another conversion).  I found the Truckee Brewing Co. in California, which had brewing equipment in an old box car.

At one point, I had "part ownership" in five British high-speed diesel-electric locomotives.  In a symbolic sense, I still do--as a Life Member of one locomotive owning group.

So when Pratt Street Ale House brewer Steve Jones heads back to his native "Old Blighty," what does he bring back for me? 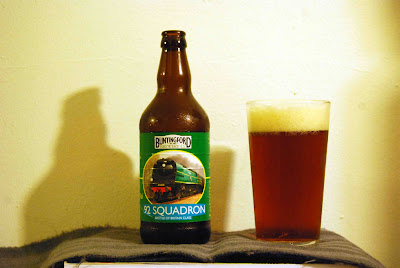 That's right.  Buntingford 92 Squadron.  A loco I almost saw under repair in 1991, but... geez, let me see, just which Bulleid class Pacific was it I rode behind out of Folkestone Harbour on those shuttle trains banked by a British Rail 4MT 2-6-4T?  No, must have been 34072 City of Wells.....

Terrific.  A nice, nutty, semi-dry, malty British best bitter at 4.5%.  Chewy, relatively lean in alcohol (many Yanks would call this a "session beer"), with a very rich malt nose--the first time in ages I could calla beer "like sniffing the malt silo".  The yeast profile is relatively clean (compared to our hometown Ringwood signature from PSAH and Red Brick Station); the malt is dry-finish crystal with just a faint hint of roast, with a mild, leafy hop note floating in the background.  If we had more beers like this in the States, it wouldn't be so hard for me to pick a beer at Max's Taphouse.  (Sorry, Steve and Mike, not quite sure you can do it with the open fermenters you have.....)

Buntingford, it appears from a certain page from their all-too-cheeky-and-sarky website, must have a staff railway enthusiast somewhere amongst their staff.  The entire website, to be honest, is crammed full of the irreverent self-deprecation and cheeky humour so prevalent in the British telly comedy to which we've become accustomed on either public broadcasting over the decades or The Late Late Show with Craig Ferguson.  (The "Allegedly FAQ" page is a special hoot.  I wish more American businesses could bring themselves to respond with this sort of attitude vaguely reminiscent of Basil Fawlty.....)

Anyhoo, excellent beer, mate.  Next time you're over there, I'll arrange for a pick-up of a pump clip or the like.  Thanks again!
Posted by Alexander D. Mitchell IV at 7/02/2011

You're welcome, glad you enjoyed it. I agree about their website (and blog) ... great stuff, hilarious! I'll look for some more of their stuff next time I'm home.