The topic of this month's The Session: Beer Blogging Friday is Cask-Conditioned Ale. Tom Cizauskas reached out to many bloggers and non-bloggers for their spin on their favorite or best cask-beer experience.

Picking a favorite for me is all but verboten.  The best line I've been able to come up with for this "favorite" nonsense is "the next one."  It's all about anticipation and discovery for me.

Besides which, I have no need to "support," any more than I already do, the regular and normal cask outlets around here--Pratt Street Ale House, Max's, Wharf Rat, Mahafey's, Bertha's, etc.  What I need to pay attention to are the "newbies"--the ones dipping a toe in the pool of cask.  Alex Hall maintains a database of cask outlets in the United States, and he is lucky enough that the number has coasted to a nice, round 500, give or take a few.  Think about it:  That's 500 bars in the nation, an average of ten per state, carrying cask ale on at least a predictable basis, out of possibly half a million bars or establishments serving beer in the nation. 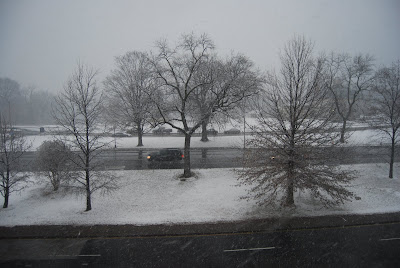 But look outside:  You expect me to go out for cask in THIS stuff?

Hell, yeah.  I grew up in the home of Selin's Grove Brewing.  I KNOW how to drive in this stuff.  Besides, two firkins are being tapped in this stuff.  As I start the car, the winter storm warnings are being upgraded to BLIZZARD warnings.  But that's later tonight, right? 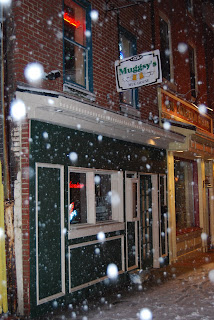 Off to Muggsy's Mug House in Federal Hill.  At 5 pm. the streets are as empty as a Sunday morning.  Thank goodness. 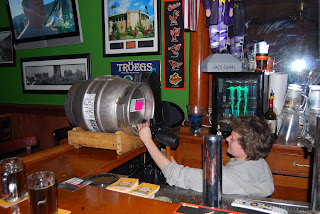 Proprietor Danny Young has several Stone beers, including oak-aged Arrogant Bastard, left over from last night's Stone "grab the pint" night.  But we're here for the firkin, and it's Heavy Seas Loose Cannon, dry-hopped with local hops.  I twist Danny's arm into tapping the firkin early.....

Unfortunately, after the first mug (mine, of course), Danny discovers an "oops"--they forgot about the spile, the little vent plug on top that lets the cask "breathe" while still allowing the beer to flow as needed.  Danny spends several minutes looking in vain for the one he knows he has around the place somewhere.  While he heads upstairs to look further, I seek out Plan B, just in case......  and digging in the kitchen, I find it, and he needs it.

Ingenuity is the mother of invention, in this case.

From there, I head north, stopping by at several locations to check out the attendance.  At B&O Brasserie, Mick O'Shea's, and The Brewer's Art, the crowds are local and loyal, happy to be there, but the attendance is more like a slow Monday than a typical Friday, of course.

On to Roland Park and Alonso's: 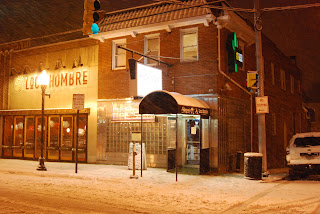 As with Muggsy's, they've started doing a firlin on the first Friday of the month.  They were planning for a firkin of Heavy Seas Loose Cannon or a firkin of their new Siren Noire, but this morning, the National Distributing truck was nowhere to be seen. "I knew enough to have Plan B in place," said proprietor Steve Summers, who called Pratt Street Ale House to have a firkin of their just-kegged Dark Mild dispatched up town pronto.  (The Dark Mild is a historic batch for the former Wharf Rat brewery: for the first time the brewery put the entire output of a batch of beer into casks for cask-conditioned beer!)  The firkin arrived an hour or three later, and was set up for pouring that night.  The adjacent restaurant may have had tumbleweeds rolling through it, but the bar crowd was eager and ready. 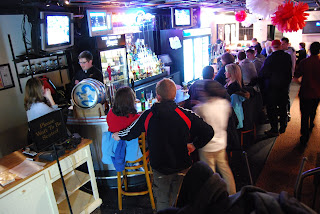 Why am I doing this?  I sure as hell don't need any more cask Loose Cannon or Dark Mild.  I don't need to risk my butt or car in this stuff.  Did I mention that I stopped at no fewer than FIVE accidents tonight--two in the same intersection?  So why?

Because I believe in cask ale.  I want there to be a thousand or more cask outlets next year.  And that will only happen if and when I support the craft.  The Real Ale Festivals will sell out with or without me.  But this, on the other hand, is evangelizing.  This is taking the Gospel to the unwashed masses, the ones possibly under the heathen spell of North American Industrial Lager.  I want to share The Word with others.

And sometimes, that just means you have to suffer a bit.  But that's all right.  I have a sip of cask in me, and I have the barleywine awaiting me once I get home.

At least I wasn't planning on stout and oysters tomorrow afternoon in Halethorpe.


The Session: Beer Blogging Friday is a monthly event for the beer blogging community begun by Stan Hieronymus at Appellation Beer, and co-moderated with Jay Brooks at the Brookston Beer Bulletin.  On the first Friday of each month, a predetermined blogger hosts The Session, chooses a specific, beer-related, topic, invites all bloggers to write on it, and posts a roundup of all the responses received.  More here.
Posted by Alexander D. Mitchell IV at 2/05/2010