So Is Maryland Tax-Hungry For Alcohol?

So is Maryland--often derided as "The People's Democratic Republic of Maryland" for its near-monopoly of the tax-friendly Democratic Party--really that tax-greedy when it comes to alcoholic beverages?

The Tax Foundation (insert your chosen rant about it being "right-wing" or "left-wing"), in conjunction with the Distilled Spirits Council of the United States, released this map portraying the relative tax rates on one 12-ounce average commercial serving of a can or bottle of beer, including (in the case of Maryland, Minnesota, and D.C.) state sales taxes. (Click on the map for a larger image; also at this link.) 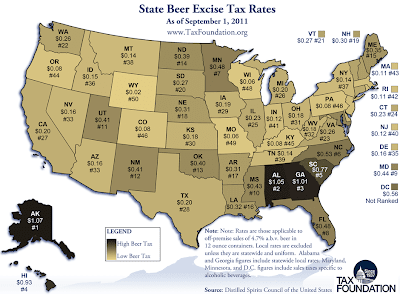 According to this chart, Maryland assesses 44 cents a serving, the ninth-highest in the nation.  D.C. charges 56 cents; though the chart says "not ranked," it would be #5 nationally.

So why do Delawareans and Pennsylvanians routinely cross into Maryland to buy their hooch?  Because taxes are only a small portion of what enters into retail choice, that's why.
Posted by Alexander D. Mitchell IV at 3/12/2012

"So why do Delawareans and Pennsylvanians routinely cross into Maryland to buy their hooch? Because taxes are only a small portion of what enters into retail choice, that's why."

A lot of my beer swilling friends in Pa. routinely shop at State Line in Elkton, both because of their prices and the selection (the selection at State Line is amongst the best I've seen ANYWHERE in the country). Obviously, it's not practical to shop for a wide range of craft beer and imports at some of the various distributor retail stores, as you'd have to buy a ton of beer in order to get a good price (how many people want, or can even afford to buy, a case of bon chien or Scaldis (bush) de nuits?). Some of the better bottle shops in Pa. have a nice selection of beer (they still don't compare to State Line from what I've seen), and you don't have buy beer by the case either. However, mark-ups at those places tend to be sky high, much higher that what you'd pay at any place in Maryland (outside of the Perfect Pour).

So yeah, taxes in Maryland may be high, but I don't think that's going to stop folks from Pa. shopping in Maryland any time soon.

(Can't speak for Deleware, though I suspect the proximity to State Line in Elkton plays a big part in the decision to shop in Maryland for them as well).