Stillwater Artisanal Ales' Brian Strumke has just announced a partnership with Jack's Bistro chef Ted Stelzenmuller to form a new bar/bistro in Brewer's Hill, to be named "Of Love & Regret Pub and Provisions."  According to Strumke, the two parties decided to join forces after collaborating on a number of successful beer dinners and discovering a mutual admiration for one another's craft. 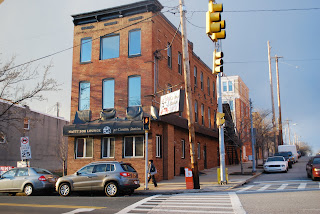 The new project will involve the acquisition of the former Canton Station bar at 1028 S. Conkling St. in Highland-town's Brewer's Hill district (of which Strumke is a native and resident), at the northwest corner of Conkling and O'Donnell Streets across from the former National Brewing Co. complex.  The former sports bar features three levels of open space for seating and serving.  Plans are to be open 7 days a week for lunch and dinner, featuring an innovative menu (with most items designed with the beers in mind) by Chef Ted Stelzenmuller of Jack's Bistro, backed by inspired cocktails, select wines, and a Stillwater-curated beer list of roughly 23 drafts, 1-2 cask ale beer engines, an extensive bottle list, and other exclusive artisan products, all of which will be available for on-site enjoyment or take-away.

The idea, said Strumke in a news release, is "to feature traditional concepts, twisted by a forward-thinking mentality." "Both Chef Ted and myself prefer to work outside the box, and both of us being avid world travelers provides us with constant inspiration," wrote Strumke.  "So the idea is to offer some of the best in global food and drink culture together with a mix of Baltimore local heritage--to quote the Talking Heads, 'head in the clouds, feet on the ground.'" From the press release:

Designed in Stillwater aesthetic, 'of Love & Regret' will provide three unique environments in the spacious venue of three floors that feature views of Baltimore's Downtown Inner Harbor and outdoor seating. The first floor will be the 'pub,’ featuring causal upscale dining with an innovative menu designed by Chef Ted to compliment the esoteric beer selection featuring many exclusive Stillwater beers and collaborations. The list will also be rounded out by selections from Brian's global brewing brethren, again including many rare and exclusive offerings.
The second floor is where the 'provisions' come into play in the form of a focused 'shop' filled with libations of all types along with other artisan products available for enjoying on site or for take away. Here is where we will see the expansion of Stillwater Artisanal into other avenues of epicurean culture including collaborations with both local and international artisans to produce exclusive cheeses, charcuterie, sausage, bread, and even coffee. "We come across so many amazing craft products around the globe while on our travels, 'of Love & Regret' will give us the opportunity to share some of these experiences with our friends and family back home in Baltimore". The third floor will be reserved for special events during the year and private rental space.

No projected opening date has been announced yet. Strumke is saying "late spring" for an opening.


UPDATE:  If you have a Baltimore Sun online subscription, you can read more here.
(interior photo from Loopnet.com real estate listings)
Posted by Alexander D. Mitchell IV at 3/04/2012