Getting Stoned at Alewife 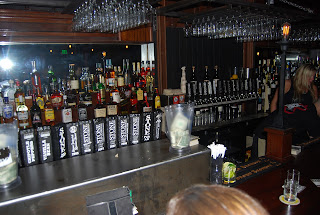 Alewife, the new beer bar in western downtown (in fact, the only decent "beer bar" I can think of west of the Light Rail in downtown) started its much-hyped Stone Brewing Co. tasting

That's right, folks. 40 Stone beers on draft.  A stunt being repeated at seven Eastern bars in as many days, but last night was the first of the series. 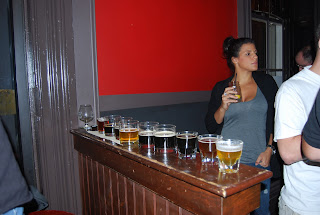 Here's someone with ten of them.  As I was to understand it, they didn't actually get through all ten.  Also, this shows a tiny flaw:  Alewife had run out of the small 5-ounce glasses they were serving up the beers in, and had resorted to every glass close to the right size available.  The staff spent much time rounding up empties to be washed and reused. 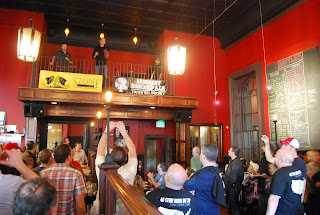 After a while, the "Man of the [Three] Hour[s]," Stone's owner Greg Koch, the CEO and co-founder of the brewery, held court with an appreciative crowd from the bar's "mid-level" balcony (there's a third floor above that, complete with bar and kitchens).  Left to right: Lee Marren, Stone representative for the Mid-Atlantic; Greg Koch, and Daniel Lanigan, Alewife's owner.  (Note the "Stone Brewing Tour" worn by one of the "early birds" at lower center.) 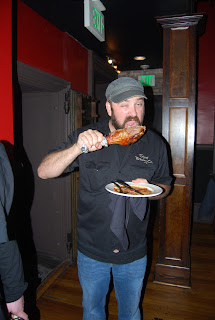 To keep things a bit simple, the bar had suspended regular dining service, and sold tokens at the door for $2.50, good for a 5-ounce glass (now, that might sound excessive, but Max's charges $3 for similar servings of Belgians and other beers, and these beers, by and large, were "up there" in that range for exclusivity, scarcity, and complexity).  Three tokens would get you one of the night's five food offerings: a half-dozen Blue Point ousters on the half-shell, a pulled pork sandwich with chipotle cabbage slaw, a wild-mushroom-and-buffalo-mozzarella risotto cake sandwich with tomato and aioli, a smoked turkey leg with chipotle BBQ sauce, or a Kobe beef hot dog with wild boar chili and pickle mustard relish on a pretzel roll.

Now, a "Kobe beef hot dog" seems as much an oxymoron as an "Imperial Mild" or a light barleywine.  The last of the turkey legs (which, as you can see, remind one of the Renaissance Festival or other more barbaric displays) disappeared before I got to claim one, so I had to try the oxymoron.  It was indeed a meal unto itself, sort of like doing a Philly cheesesteak with prime rib, smoked Gouda, and seasoned oyster mushrooms on ciabatta loaf.  (Hey, if I see that sandwich on a local menu, I'm claiming a free one for inspiring it.)  I doubt they can make either the hot dog or the turkey leg a regular special, but I'll be back looking for them. 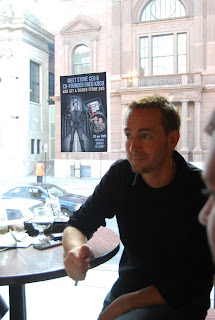 Koch stuck around for over three hours to talk with his fans and fans of his brewery's beer, and to sign copies of a DVD of videos about the brewery's beer--the $2 fee was to be donated to charity.  He finally did have to leave, as he had to be up early for a noon appearance at Lord Hobo in Boston the next day.

Stone's beers need no introduction to most of you.  All 30-some beers left will remain on through next Wednesday or Thursday, when Alewife will put 30 other beers back on the lines and rotate the remaining Stone beers, ten at a time, until they are depleted.  However, servings revert back to standard pints or goblets at standard prices, not the sampler extravaganza of last night.

Would I recommend such an event to others?  Well, there is a problem.  With so many beers from the same brewery, and a great many of them higher-alcohol, palate fatigue sets in--quickly.  I've seen (and experienced) similar situations at other "everything-the-brewery-has" pouring extravaganzas such as epic Victory, Allagash, and Lagunitas samplings at Max's Taphouse.  After the sixth or eighth high-octane hop-bomb or complex mix, it doesn't matter how many palate cleansers you nibble or glasses of water you chug (and Alewife was being very generous with the water), it all blurs together on the tongue.  Better to hit them several at a time over the course of a month or so than all during one weekend.

To answer another question, yes, Alewife is planning to install beer engines and routinely stock cask ale.  Just wait until the craziness of the Stone mania and Baltimore Beer Week dissipates somewhat.
Posted by Alexander D. Mitchell IV at 10/02/2010

"servings revert back to standard pints or goblets at standard prices, not the sampler extravaganza of last night."

Alex, I stopped by again last night, and apparently this is not the case. They were still selling individual sample glasses for $2.50 a pop, or you could buy a full pint of anything for $7.50 (yes, anythng, even the barleywines). I'm not sure how much longer that will continue, but probably for the rest of the week would be my guess, as almost everything from Friday was still flowing as of yesterday evening (I was there around 6:00).

"Three" hours? Hell, I was at Alewife from 4pm until after 11pm!

It was good to meet you brother, thanks for the blog post! All in all it was a great time and it was awesome meeting all the great Baltimore beer fans.

John: I went by what Alewife management told me that night. If the sample sizes continue, more power to them.

Greg: You disappeared from my view ca. 8:30, and your "handlers" had been anxious about getting you out in a timely fashion because of your early travel the next morning. Silly me for believing them.