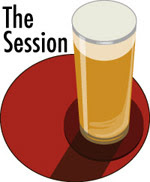 Just in time for The Session #44: "Frankenstein Beers" comes this press release of a study in Italy in which the "proteome," or the inventory of the complete set of proteins in an organism, for beer has finally been identified:


In an advance that may give brewers powerful new ability to engineer the flavor and aroma of beer — the world's favorite alcoholic beverage — scientists are publishing the most comprehensive deciphering of the beer's "proteome" ever reported. Their report on the proteome (the set of proteins that make beer "beer") appears in ACS' monthly Journal of Proteome Research.
Pier Giorgio Righetti and colleagues say they were inspired to do the research by a popular Belgian story, Les Maîtres de l'Orge (The Brew Masters), which chronicles the fortunes of a family of brewers over 150 years. They realized that beer ranks behind only water and tea as the world's most popular beverage, and yet little research had been done to identify the full set of proteins that make up beer. Those proteins, they note, play a key role in the formation, texture, and stability of the foamy "head" that drinkers value so highly. Nevertheless, scientists had identified only a dozen beer proteins, including seven from the barley used to make beer and two from yeast.
They identified 20 barley proteins, 40 proteins from yeast, and two proteins from corn, representing the largest-ever portrait of the beer proteome. "These findings might help brewers in devising fermentation processes in which the release of yeast proteins could be minimized, if such components could alter the flavor of beer, or maximized in case of species improving beer's aroma," the report notes.

Geek alert: If you're one of those folks who took organic chemistry in college and remembers it or still works in that field, the study is online here, in English.

If you're not one of those folks, here's what you're probably asking:  "Commercial beer bottles [330 ml] were all of Italian origin (Splügen from the Angelo Poretti brewery, Induno Olona, Varese, Italy) and bought in local supermarkets."  The beers did use token amounts of corn (maize); thus the corn proteins.

The most interesting part of this for the layman or ordinary beer drinker?  There were twice as many proteins from yeast as there were from barley malt, far more than previous experiments had discerned.


The results here presented show the unique performance of our CPLL technique and demonstrate its capability in detecting trace components, especially in regard to the large number of Saccharomyces proteins (both the cerevisiae and the bayanus), that must have been shed during the fermentation process as a result of dying yeast cells. This was quite unexpected, considering that up to the present all other proteomic investigations reported a total of just two yeast proteins. Additionally, as the beer under investigation was stated to be made by a mixture of two cereals, barley and maize, also a few proteins from this last cereal could be detected. These findings might help brewers in devising fermentation processes in which the release of yeast proteins could be minimized, if such components could alter the flavor of the beer or maximized, in the case of species improving the beer’s aroma.

This doesn't automatically mean that beers derive twice as much of their flavors from yeasts as they do from the other ingredients, but as anyone who has ever tried a "yeast test" experiment from a homebrewer or brewery (the same base wort, different yeasts) can tell you, it's a major factor.

So, in theory, the mega-breweries could pursue biologically-engineered beers now that they have this proteome.  Of course, as a moment's consideration will tell you, any beer is engineered by man--it's called a recipe.  We're not likely to see "Franken-ale" (except maybe in Senator Al's home district in Minnesota) in the way that we're seeing genetically modified foodstuffs such as grain or salmon enter the marketplace.  But it's likely the lab scientists at the giant mega-breweries will take a study like this and ask if there exist any ways to improve the efficiency or flavor profiles of the house yeasts used.  It's money, not flavor, that drive the likes of Coors, AnBuInBev, Diageo, and the like.

Does anyone want to send these scientists some alternate products, such as a hop-monster IPA, Imperial Stout, or hefeweizen?  Or a funky Belgian ale?

Thanks for the contribution!