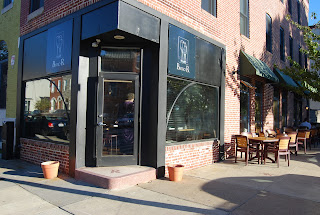 Well, no wonder we haven't heard much out of Wayne lately.

A report from Baltimore Magazine covers opening night (last night, during BBW's Opening Tap) at Mahaffey's new project, Bistro Rx at Baltimore and Linwood Streets next to Patterson Park's northeastern corner, about a mile to the north of his eponymous bar in Canton.

The wine menu includes 20 options by the glass (which you can also get by the bottle) and an additional 40 bottle choices. Bistro's happy hour is from 4-7 p.m., which includes $3 off wine bottles and $1 off everything else.
And, for anyone that knows anything about Mahaffey's, it comes as no surprise that the beer selection was on-point. There are 24 bottles available, like Lindemans Framboise Lambic, Chimay White, and Westmalle Triple. The menu included local selections, like Flying Dog Pale, Dogfish Head 90 Minute, and Loose Cannon. There were also seasonal beers on tap, like Paulaner Oktoberfest and Cape Ann Fishermans Pumpkin Stout. Most drafts were $5.

I caught up with Wayne this evening at his new bar.  "I had to get this bar open as soon as possible; it just happened that it was October 7th, the start of Baltimore Beer Week," he said.  Although he carries several quality beers (such as a dedicated Unibroue tap tower), he is adamant: "This is a wine bar, not a beer bar."  The place is running with an experimental food menu for the next two weeks, and invites customer feedback.
Posted by Alexander D. Mitchell IV at 10/08/2010