There are still tickets available for the Chesapeake Real Ale Festival this coming Saturday, October 16th. Sponsored by the Society For The Preservation of Beers From The Wood and Pratt Street Ale House, the cask list growing bigger (and more delicious!) each day.  Last night, confirmed by the importer: 2009 J.W. Lees Harvest Ale, very high on any true beer aficionado's "must try before you die" list.  "Unfortunately," said Legends Limited rep Erin Tyler, "they found that the wooden barrels they had been sending tended to leak, so it's coming in a metal firkin." 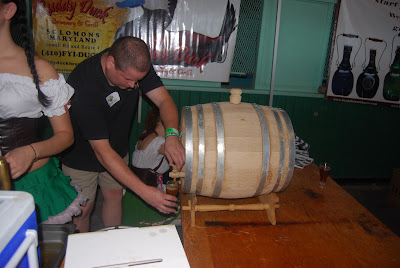 Not to worry, at least one wooden cask has been pledged to the festival: Ruddy Duck's brand-new oak cask, seen here in action with Ruddy Duck's ESB at the BAM Oktoberfest last Saturday.......  Well, it had been promised; no word on if it actually got carried north to Baltimore as of yet.....


Here's the semi-final list just issued by head firkin wrangler Stephen Jones of PSAH  (in no particular order of merit):

Other stuff MIGHT show up.  If it appears, just shut up, don't ask too many questions, and enjoy.


A reminder that the Baltimore Marathon is determined to screw things up for even the most dedicated beer fans........
Posted by Alexander D. Mitchell IV at 10/13/2010