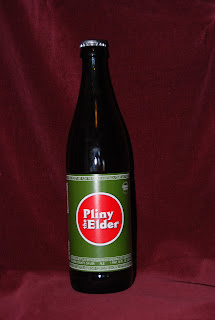 Those of you who picked this may commence dancing, bragging, or whatever.........

So what did I really think?  Well, okay, yeah, it was an excellent Imperial IPA.  But I'm not necessarily a hophead.  Would I have this again?  Definitely, if I were in the area and could get it fresh (this bottle was supposedly picked up for me at Russian River when the blogger was en route to the airport to come to Philadelphia and Baltimore).  Would I special-order this if the People's Demokratik Republik of Maryland would let me?  Why?  I can find a dozen perfectly good alternative I2PAs around town--including Heavy Seas Loose Cannon on cask, occasionally.

Is it worth a sky-high rating on BeerAdvocate or RateBeer--#2 on BA, #23 on RateBeer?  It's pretty darned good, but as I see it, the lists there are heavily skewed towards extreme beers.  If that's your baseline and you're a hop freak, this is apparently one to seek out.  I think its real appeal is that it's just "extreme" enough to appeal to both the "can't get enough hops/alcohol" geeks but just subdued enough for the beer fans who like more moderate beers and don't wish to be assaulted by an overdone beer.  In that way, it's spot-on.

My prediction: If they ever get to the point where this beer is made in enough quantity to be sent here, three things will happen:
1) Those who judge beer to brag about it will complain that it's not as good as when someone had to order or bring it directly from the brewery (see New Belgium Fat Tire);
2) Firkins will be sent by jet across the nation to be debuted at big beer events or limited tastings at inflated prices and/or exclusive events;
3) Some twit will insist on trying to pump it through a "Randall" hop infuser..........
Posted by Alexander D. Mitchell IV at 10/28/2010

Up until the prediction part of your post, I completely agree with everything you said Alex (especially your comments about the ratings on BA and Ratebeer).

The reason I don't entirely agree with your predictions is because this has already largely happened in Philly and Portland.

Surprisingly, I haven't ever heard #1, though I've heard quite a few people say that they don't understand what all the fuss is about, and that there are a number of local options as good or nearly as good (not so much in Philly, but all the time in Portland).

#2. :-) I don't believe Elder has ever come in firkins. Seriously though, I'm sure you're right, as long as the beer remains rare/scarce, that sort of thing is going to happen.

Until elder became more readily available in SEPA... let's just say I'm too embarrassed to mention some of the events I attended in SEPA in order to sample several glasses of it (year old Elder anyone?).

#3 Probably (haven't ever heard of such a thing, but it sure wouldn't surprise me). :-)

I've never really tasted a beer that stands up to some of the hyperbole thrown at Pliny the Elder on the beer sites, but I do think it is as close as you can get to an objective "best" I2PA. What does that mean? I have no idea. But if someone asked me to name a better I2PA, I couldn't do it, and if there was a trivia contest in which someone said, Name the best Imperial India Pale Ale, I'd probably drop Pliney without hesitation. I have no idea what that proves.

I don't really get the hype or counterhype of Fat Tire. Having lived in areas where it's available, maybe I've just missed it all, but it has always striked me as simply a pretty good beer that's available damn near everywhere (out here). I never really missed it all that much when I was back East though. It's fine.

What do I win? If it's just bragging rights, then here goes:

Anyway, I've had PtE before. It's an excellent beer, perhaps the best of its style, and the second best smelling beer (behind Ballast Point Scuplin, which should be turned into a scented candle, IMO). I'm sorry that the MD readers of this blog (I work and live in DC, so I could use South Bay Drugs to ship some to me) suffer through both arcane and inane laws. Then again, you have Congressional representation.