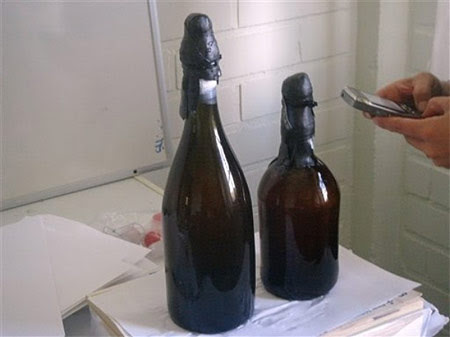 CNN is reporting that a stash of still-full beer bottles has been discovered alongside a shipment of champagne discovered in a shipwreck in the Baltic Sea:

"At the moment, we believe that these are by far the world's oldest bottles of beer," Rainer Juslin, permanent secretary of the island's ministry of education, science and culture, told CNN on Friday via telephone from Mariehamn, the capital of the Aland Islands.
"It seems that we have not only salvaged the oldest champagne in the world, but also the oldest still drinkable beer. The culture in the beer is still living."
Juslin said officials had talked to a local brewer about whether the new-found beer might be able to yield its recipe after experts decipher the brew's ingredients.
The newest find came as divers unearthed bottles separate from the earlier champagne find. While lifting a few to the surface, one exploded from pressure. A dark fluid seeped from the broken bottle, which they realized was beer.
All the cargo on the ship -- including the beer and champagne -- is believed to have been transported sometime between 1800 and 1830, according to Juslin. He said the wreck was about 50 meters deep (roughly 164 feet) in between the Aland island chain and Finland.
The cargo was aboard a ship believed to be heading from Copenhagen, Denmark, to St Petersburg, Russia. It could have possibly been sent by France's King Louis XVI to the Russian Imperial Court.

There is, of course, a precedent for the concept of brewing a beer with shipwrecked beer yeast: Flag Porter, a porter brewed to an 1850 recipe using yeast salvaged from bottles uncovered in an 1825 shipwreck in the English Channel.   This beer was originally contract brewed by Elgood's Brewery in England, and later by Darwin Brewery in Sunderland (northeast England).  It appears that Darwin has ceased production of Flag Porter, at least for the time being (no reference to it on their website except an old mention in a book), and Legends, the former importer, reports that it changed to a different importer earlier this year......