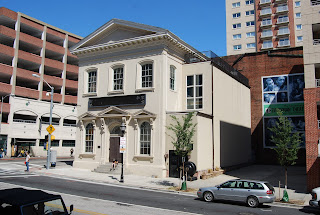 Boy, that was fast. (Well, it kind of helps to get a place that someone else already turned into a bar.)

Owner Daniel Lanigan has reported that Alewife Baltimore, the new beer bar restaurant at 21 North Eutaw St. (the former Lucy's/Maggie Moore's, originally the Eutaw Savings Bank Building, built 1857) will open to the public at 4 PM on Thursday, September 16th.  There will be two days of "soft" opening tests by invitation, typical for new restaurants. 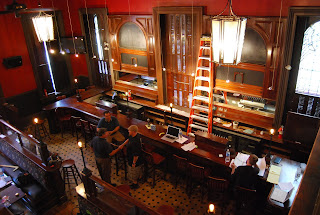 The interior, with two 40-tap bars on different floors and a middle level with a balcony and a "vault" room, will be little changed (at least initially) from the Irish-pub days, with the removal of a few Irish-themed bits of decor (such as large Guinness mirrors above the bars) and repainting.  The 40 draft lines are being installed Friday and this weekend, according to Lanigan, who owns two other 40-tap beer bars in western Massachusetts, a third in Cambridge, Mass., and a fourth, more "normal" bar in Boston.  As with the other four locations, cask ales will be a part of the offerings, as will over 100 bottled beers. 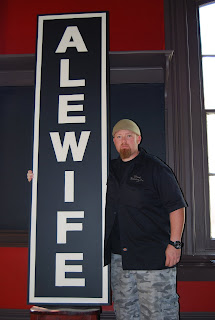 Lanigan (seen with the sign that will hang outside soon) also gave a few details about the first beer event planned, the massive Stone "tasting" that begins Friday, Oct. 1st.  Contrary to reports that the event--which will feature no fewer than forty Stone beers on draft, including extremely rare beers and variations on their usual recipes--would be for "one night only," Lanigan said all forty beers would be available through the weekend and through the next week, and then rotated, probably ten at a time, through the bar as other beers are added and tapped with Baltimore Beer Week in mind.  The beers will be available in sample 5-ounce glasses and full servings, but don't get ambitious--Lanigan said that if anyone attempts to order all forty in one sitting, "We won't let 'em.  Forty five-ounce samples, that's over 12 pints in three hours." (Not to mention the expense...)

Lanigan described the restaurant's planned cuisine as "New American, or as I call it, New Viking."  We'll just have to come on by next week to find out just what that's all about, won't we?
Posted by Alexander D. Mitchell IV at 9/09/2010

No mention of a beer engine? That's a shame, would've been a nice addition to the local cask ale "scene"!

Actually, all four of his Massachusetts establishments have beer engines, and he explicitly said he plans to hold "real ale festivals" in the future. I'm sure Alewife plans to become a loyal consumer of the local firkins before too long.....

I don't know that this fellow thought through the implications of opening a bar named after a Boston T stop a few blocks from Camden Yards. I suppose Alewife's actually in Cambridge... but still.

Hmmm. Finally, an explanation for the name choice that might make sense. But, you know, some of us don't follow sports or Boston transit closely enough to draw that connection. I was thinking of the fish, of course......

Alex. Regarding cask ale, I could have sworn that I read in some other article that they were going to feature weekly counter top firkins from various local breweries. At least that's what I recall reading. Otherwise, I've only been to the Moan and Dove, which as you mentioned, almost always has something on cask to compliment their draft selection. Hard to imagine why they wouldn't do something similar here.

@ Zach - I'm sure if he did think them through, he probably realized that most Sox fans enter that stadium each year than O's fans...