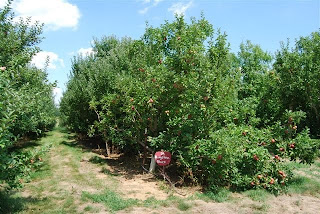 The full story will be held for Mid- Atlantic Brewing News, but Maryland's first commercial hard-cider production facility of the post-Prohibition era is set to open tomorrow to the public with a day of events and tours.

Distillery Lane Ciderworks has been somewhat of a secret among members of Brewers United for Real Potables for several years now, as the orchard waited for over 2,000 cider apple trees, planted in 2001-02, to produce enough apples for commercial production.  The time has come, and the cidery is opening to the public this weekend with some of the first cases of 750-ml capped bottles ready for purchase. 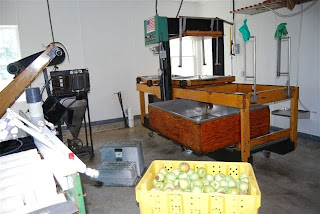 For those that don't know it, not every apple makes a good hard cider.  Most non- fermented "sweet cider" (the brown, cloudy stuff you see in the jugs in your supermarket or farmers' markets) is made from whatever apples are lying around, usually the cosmetically-imperfect ones that would languish unsold in a produce stand or supermarket.  This can be a mix of eating, baking, or other apples depending on the orchard.  Alcoholic or "hard" cider, on the other hand, is best fermented with specific apple varieties that lend particular characteristics to the finished product--high sugars, aroma, tartness to balance the sugars, etc.  Many of the apple varieties that make ideal cider will never be found on a farmer's market stand, even if the orchard is selling heirloom or antique varieties of apples.  (When was the last time you saw Champagne grapes at a produce stand?  Or Chardonnay, or Riesling, or Vigonier, or Vignoles?  And when was the last time you saw good wine made from Concord or other eating grapes?)

I sampled some test bottles at the cidery last weekend; suffice it to say that they were probably the best ciders I have ever tasted, and that includes way too many English and North American commercial ciders.

is there any plan for their cider to be sold at area liquor stores?

At the moment, production amoiunts to that of an overly ambitious home winemaker, with a couple hundred cases maximum. The owners were having nightmares of selling their entire inventory this weekend just at grand opening. I'm sure they would like to have enough inventory on hand to distribute to liquor stores, but for the moment that's not going to happen.

We were there on Sunday. Great Place, Great people, Great Cider! We plan to return soon and try more of there hard cider.