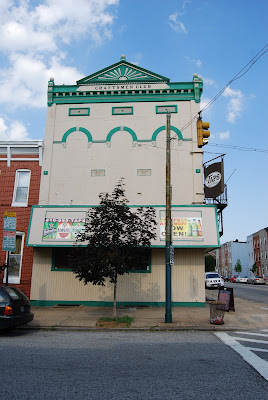 The Baltimore Sun's Midnight Sun blog, by Erik Maza, reports that the Federal Hill bar formerly operated as Taps, in the old Craftsmen Club building at Fort and Charles Streets, was bought by Marc McFaul, owner of the Ropewalk Tavern, Dark Horse Saloon, and Stalking Horse, and is slated to be reopened possibly by the end of the year after some remodeling--including, according to the comments, two large windows to lighten up the previously cavern-like interior.

Question: Ropewalk Tavern has a relatively large beer selection, one that many folks in the hinterlands would kill for.  Why does that bar remain relatively unnoticed by beer enthusiasts in this area?
Posted by Alexander D. Mitchell IV at 11/23/2010

I've been to Ropewalk many times. Every time I go, I'm expecting to have a great time, because it looks like exactly what I want out of a bar. I never do. Can't explain it, either.

Completely agree Oriole Way. I've gone a number of times, but always end up leaving dissatisfied for some reason. They have a decent bottle and tap list, and I kind of enjoy their Irish pub inside the pub idea, but.... I don't know. A beer bar where the most exciting items on the tap list are SNPA and/or Arrogant Bastard.... that's just not what I'm looking for in a beer bar these days.


Nothing wrong with the tap list at Looney's over in Canton either, but reaction is exactly the same whenever I visit. Like the Ropewalk, I walk out thinking there's no reason to return any time soon.

I feel like it's a pretty easy answer. Unlike all the other good beer bars, that place is one of the traditional dbag hang outs in Fed Hill.

Well, Mr. Cover, if I'm to believe the following site, they're not drinking anything besides Coors Light, so who's drinking the rest of the Ropewalk selection? http://www.campussqueeze.com/post/69-Ways-Youre-A-Douchebag.aspx